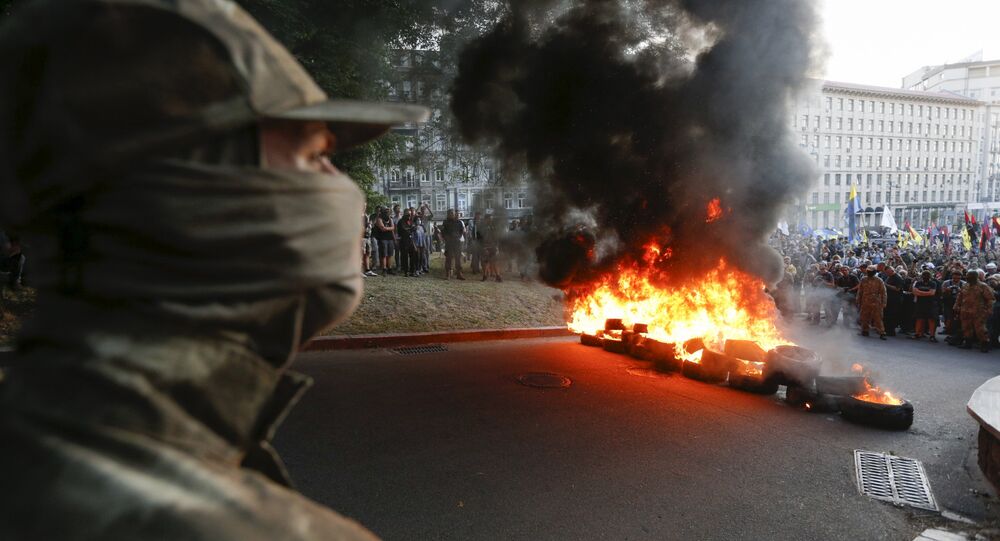 Chaos in Ukraine, as reflected by the deadly shootout between notorious Right Sector fighters and police in the town of Mukachevo among other things, threatens stability in the country and could spill over to Europe, Russian Foreign Ministry's Human Rights Ombudsman Konstantin Dolgov warned.

"We have long said that absolute lawlessness, chaos in terms of human rights and absent rule of law pose a threat not only to Ukraine and to the unity of this nation, undermined by Kiev, but also to Europe," Dolgov told Rossiya-24 TV.

According to the Russian diplomat, this threat has gradually become evident. Neighboring countries are now more aware of what is really happening in Ukraine but a full acknowledgement of the state the country is in is a long way off for many in the West.

"We wish Brussels and the United States would better understand this," Dolgov added, saying that Western capitals still fail to adequately react to the events in Mukachevo or to the real threat posed by ultra-nationalists, including the Right Sector.

On July 11, a shootout in southwestern Ukraine between local police and Right Sector militants left 3 people dead and 13 injured. The fighters armed to the teeth blamed the police for targeting them first.

© AP Photo
Mukachevo Crisis: Right Sector Rehearses Uprising Against Kiev - German Media
Kiev set off on a manhunt and the Right Sector responded with rallies in Ukrainian towns calling on Ukraine's interior minister to step down.

The Right Sector was formed as a coalition of nationalist and neo-Nazi organizations during the Maidan protests in Kiev at the end of 2013. In November 2014, Russia's Supreme Court blacklisted the Right Sector as an extremist organization and banned its activity in Russia. Earlier, Russia launched a criminal case against leader Dmitry Yarosh for public incitement of terrorism.

The group and other nationalist organizations play key part in Kiev's offensive against independence supporters in eastern Ukraine and are responsible for countless atrocities committed there since April 2014. However, the government has never managed to take these groups, which enjoy a significant degree of autonomy, under full control.