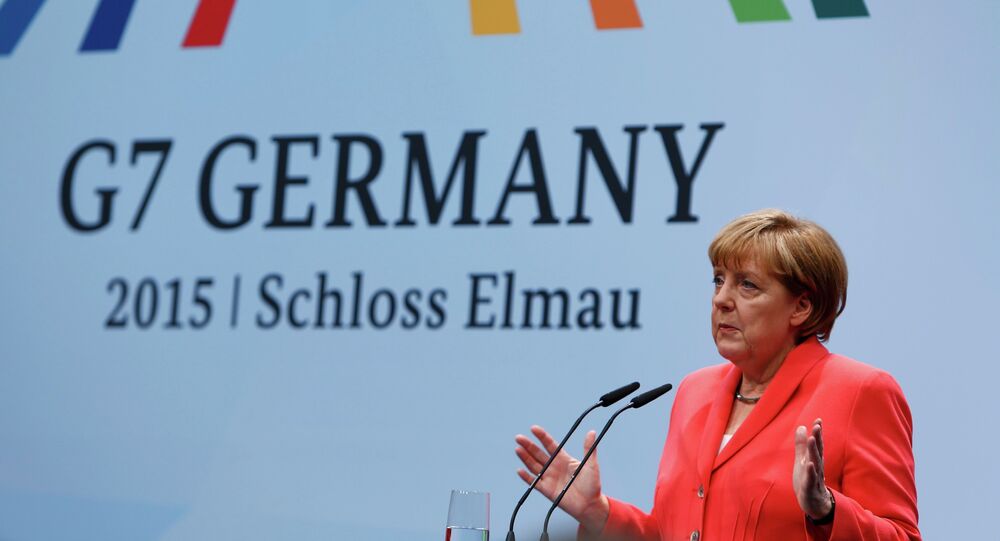 The simple G7 logo created for the latest summit held in Germany's Bavaria earlier this summer cost authorities nearly $90,000, Abgeordnetenwatch.de (Parliament Watch) reported, adding that it was only a drop in the ocean compared to the total price tag.

The Federal Press Office provided the information in response to a freedom of information request sent by the Parliament Watch five weeks ago. The agency also tried to explain the hefty price tag:

As it turned out, the logo had to be changed "due to the current political situation and the resulting downsizing of membership."

According to the Federal Press Office, a German graphic design agency started to work on the logo in February 2014. Back then everyone expected the leaders of eight countries to meet in Schloss Elmau.

© AP Photo
G7 Summit Makes No Sense Without Russia, China
The situation changed a month later when the G7 leaders decided to suspend Russia's membership of the forum over Moscow's meddling in Ukraine's affairs and reuniting with Crimea. The preliminary draft ended in the trash bin and designers were back to square one.

The price for the logo will surely raise some eyebrows, but it is still a drop in the ocean compared to the total cost of the high-profile event.

The G7 summit held in Bavaria cost Germany a vast deal of money and the authorities have been severely criticized for this. Nobody knows the exact figures but, according to the Federal Ministry of the Interior, the summit cost some $220 million.

© Sputnik / Alexei Druzhinin
Putin is Convinced Canada Will Change Its G8 Stance if US Says So
Bavaria's tax payers union begs to differ. They estimate that the summit cost nearly $400 million. Consider this: just setting up a fence around the hotel premises cost $2.4 million.

In May, Russian Foreign Minister Sergei Lavrov pointed out that G8 was an "informal club" thus no one could be expelled from it. "No one gives out membership cards and no one can expel members," the diplomat explained.

Not every G7 member opposes Russia's return to the format. In June, German Foreign Minister Frank-Walter Steinmeier expressed hope that Russia would return to the group, saying that "it's not in our interests to retain the G7 format over a long period of time."

‘Aliens’ Leave Message for G7 on a Crop Field in Russia