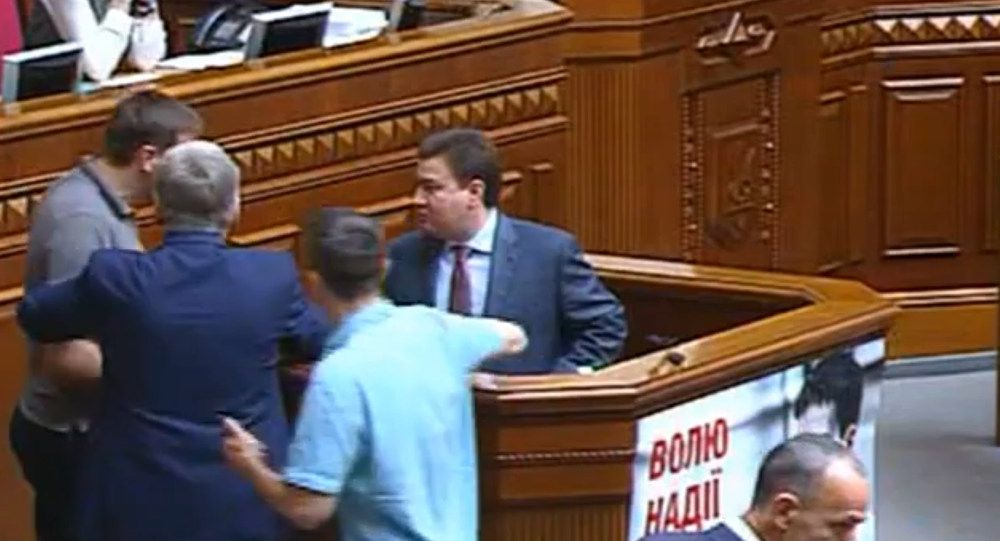 As we know Ukrainian politicians can quickly lose their temper and start throwing punches when their arguments aren’t getting across.

During a regular session at the Verkhovna Rada, Independent MP Volodymyr Parasyuk almost had a fist fight with Viktor Bondar, a member of the Revival Party.

The confrontation occurred after Bondar criticized actions of the Right Sector amid a crisis in the Ukrainian town of Mukachevo. On Saturday, a shootout between police officers and Right Sector militants left three men dead and 13 wounded.

"Today, it [the Right Sector] is essentially an armed criminal gang that has no affiliation with law enforcement and they do whatever they want," Bondar said during his speech.

These words were enough to make Parasyuk lose control. He sprang up toward the rostrum and jumped at Bondar. Luckily, last minute he was stopped by a group of other parliamentarians.

Earlier this year, two Ukrainian politicians decided to solve their differences by swinging first. Yegor Sobolev, a member of the Self-Reliance Party, squared up against Vadim Ivchenko from the Fatherland Party. The two had quite a fight. Ivchenko, dressed in a grey suit, showcased good boxing skills, bobbing and weaving while throwing loopy counter-punches over his opponent's hands before flooring Sobolev with a perfectly-timed right cross.

© REUTERS / Valentyn Ogirenko
Right Sector Will Not Lay Down Arms by Poroshenko’s Order
The Right Sector was formed as a coalition of nationalist and neo-Nazi organizations during the Maidan protests in Kiev at the end of 2013. The organization has played a major role in violent clashes with police, and played a key role in escalating last year's violence in Kiev which culminated in the February 2014 coup.

In November 2014, Russia's Supreme Court blacklisted Right Sector as an extremist organization and banned it in Russia. Earlier, Russia launched a criminal case against leader Dmitry Yarosh for public incitement of terrorism.