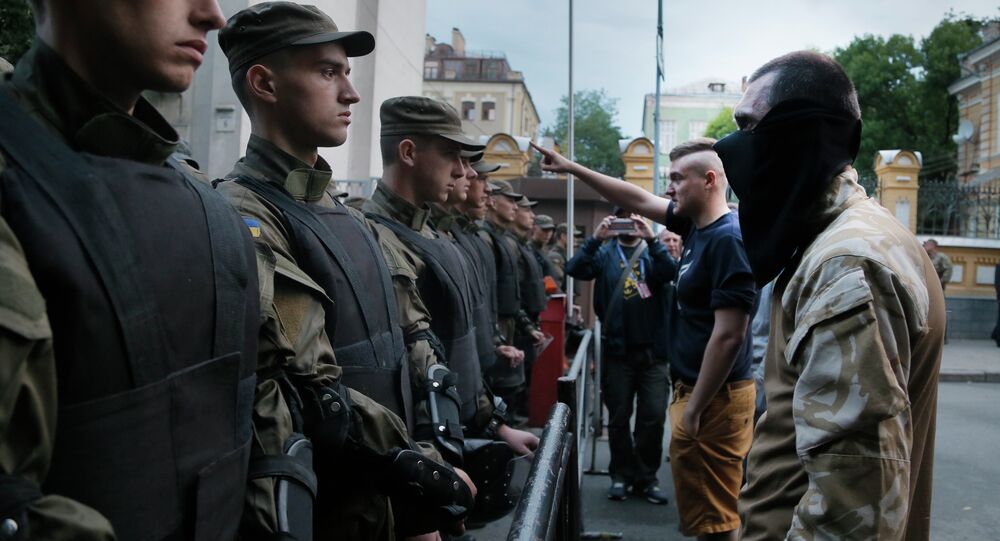 Last Saturday, members of the Ukrainian Right Sector nationalist movement announced protests in Kiev over the standoff in the western Ukrainian town of Mukachevo. Protesters are demanding the resignation of the country’s Interior Minister Arsen Avakov.

Last Saturday, Right Sector representatives announced ongoing protests in Kiev over the recent conflict in the western Ukrainian town of Mukachevo. Activists are demanding the resignation of the country’s Interior Minister Arsen Avakov and commanding police officers in the Zakarpattia Region.

Participants of the protests in Kiev set up kitchen trucks. They are raising money to replenish food reserves. They also lit candles on the road to commemorate the memory of those killed in the Mukachevo shootout, according to media reports.

The western Ukrainian town of Mukachevo became one the country’s trouble spots on Saturday after Right Sector members exchanged fire with local police. The incident left several people killed and 13 injured, including law enforcement officers. The attackers ran away and hid in the mountains.

© AP Photo
Shooting in Mukachevo Result of Smuggling Redistribution - Poroshenko
The Right Sector said police opened fire at its members without warning. The Interior Ministry, in its turn, blamed Right Sector fighters for the shootout.

The Right Sector was formed as a coalition of nationalist and neo-Nazi organizations during the Maidan protests in Kiev at the end of 2013. It has played a major role in violent clashes with police, and played a key role in escalating last year's violence in Kiev which culminated in the February 2014 coup.

In November 2014, Russia’s Supreme Court blacklisted Right Sector as an extremist organization and banned its activity in Russia. Earlier, Russia launched a criminal case against leader Dmitry Yarosh for public incitement of terrorism.