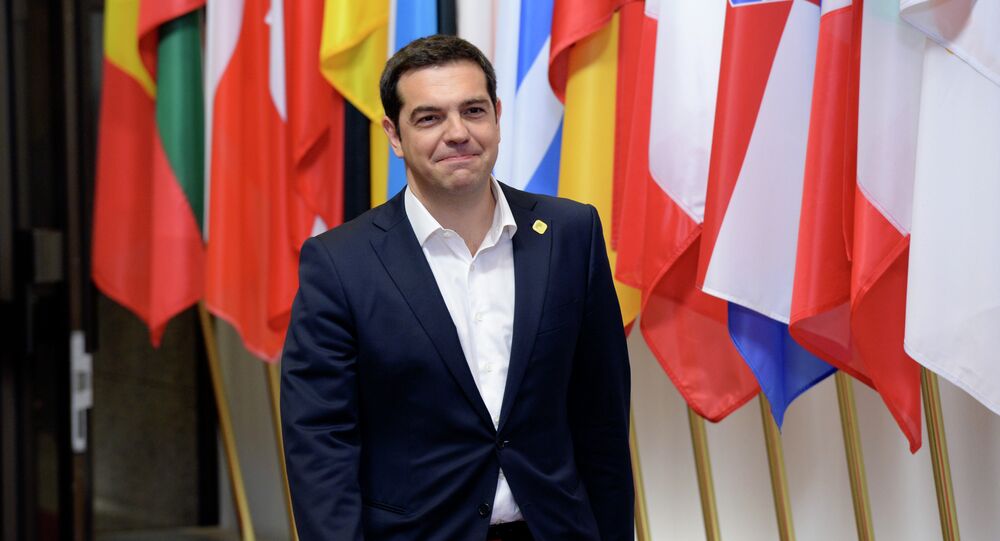 Farewell to Grexit: Idea of Leaving Eurozone to Remain in Past - PM Tsipras

Alexis Tsipras said conditions emerged for Greece to renew its economy. He said that Greece was able to avoid handing its state assets over to foreign organizations.

© AFP 2020 / ARIS MESSINIS
Eurozone Countries Hammer Out Agreement on Greek Debt, Ready to Negotiate With Athens - Tusk
BRUSSELS (Sputnik) – The idea that Greece might leave the Eurozone will remain in the past, Greek Prime Minister Alexis Tsipras said Monday.

After the Greek government broke off negotiations with its international lenders about two weeks ago, the country's population voted against a bailout deal proposed by the creditors, resulting in speculation about a possible exit from the Eurozone.

“We held a rough battle, we fought to the end for the best agreement that would put the country back on its feet. The solution gives Greece the conditions for financial stability and there are conditions to renew the economy,” Tsipras told journalists.

“Completing the [agreement] will be difficult. The measures will create crisis tendencies, but the development package, the reconstruction of the debt and financing over the next three years will create the feeling of investors that Grexit will remain in the past,” Tsipras said.

The bailout agreement for Greece was difficult, but Greece was able to avoid handing its state assets over to foreign organizations and there is hope the majority of Greeks will support efforts in getting the country back on its feet, Tsipras said.

“We were able to reach a restructuring of our debt and financing in the mid-term and we will continue the fight in order to return our lost national sovereignty.”

He also expressed hope that the Greeks would support the efforts needed to return economic growth back to the country.

“I believe that the majority of people will support the efforts in order to return to [economic] growth.”

© REUTERS / Alkis Konstantinidis
Kremlin Has No Plans to Provide Financial Aid to Greece, But Ready to Cooperate
The hard-won growth package is estimated at 35 billion euros ($38.7 billion) and involves debt restructuring, according to the BBC.

An agreement on the third Greek bailout deal was announced Monday after 17 hours of talks between European leaders who met in Brussels on Sunday. By Wednesday, Greece is expected to pass the reforms recommended by creditors.

Eurogroup chief Jeroen Dijsselbloem said the agreement includes a $55-billion-dollar Greece-based fund to manage the country's assets, the BBC said. About half of the money will be used to recapitalize cash-strapped Greek banks that have been closed for weeks.