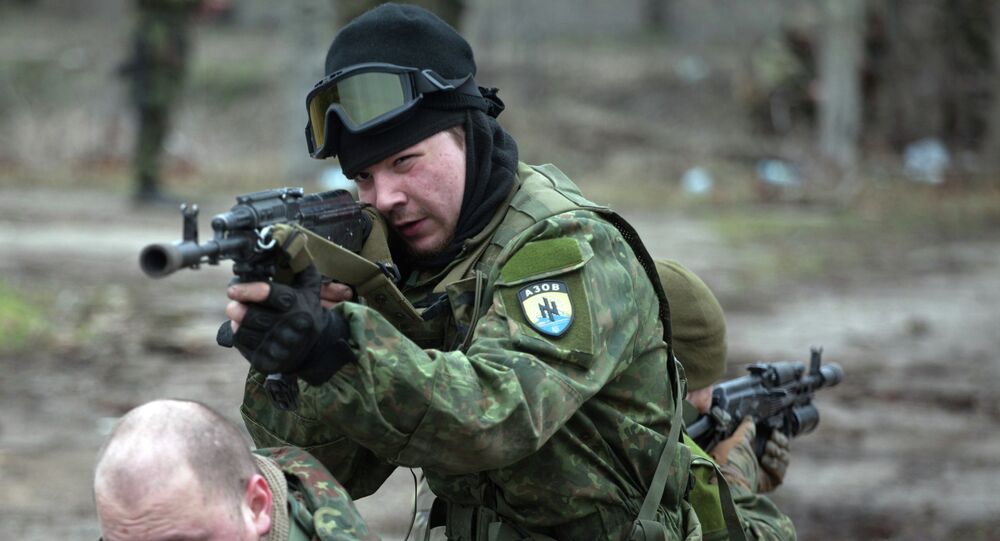 Ukraine's neo-Nazi Azov volunteer battalion has reportedly signaled their willingness to assist in de-escalating the conflict that broke out between police and Right Sector members in the western Ukrainian town of Mukachevo.

According to the Azov battalion's page on the social network VKontakte, the paramilitary group's leadership understands the angry reaction of "Ukrainian patriots" to the ongoing negative trends in Ukraine; at the same time, Azov's leadership underlines the importance of avoiding internal confrontation in the country.

"In order to ensure an unbiased and impartial investigation, we suggest that the Verkhovna Rada [the parliament] of Ukraine should immediately lift the parliamentary immunity of deputies as the main perpetrators of the conflict," the Azov battalion said in a statement.

© REUTERS / Valentyn Ogirenko
New volunteers for the Ukrainian interior ministry's "Azov" battalion line up after taking part in an exam before heading to the frontlines in eastern Ukraine, at the battalion's training centre in Kiev, Ukraine, June 13, 2015

According to the statement, "it is also necessary to take full control of actions by law enforcement agencies, whose participation in the resolution of this conflict casts doubt on their unbiased approach."

© AP Photo /
Deadly Shootout in Ukraine Sees Two Right Sector Members Killed By Police
The conflict sparked on Saturday, when members of the Right Sector movement exchanged fire with police in Mukachevo. The Ukrainian security forces said that three attackers were killed and a total of 10 people, including five law enforcement officers, were injured.

The Right Sector has played a major role in violent clashes with police, and played a key role in escalating last year's violence in Kiev which culminated in the February 2014 coup. In January 2015, the Russian Ministry of Justice added the Right Sector to its list of non-commercial organizations whose activity in Russia is prohibited.