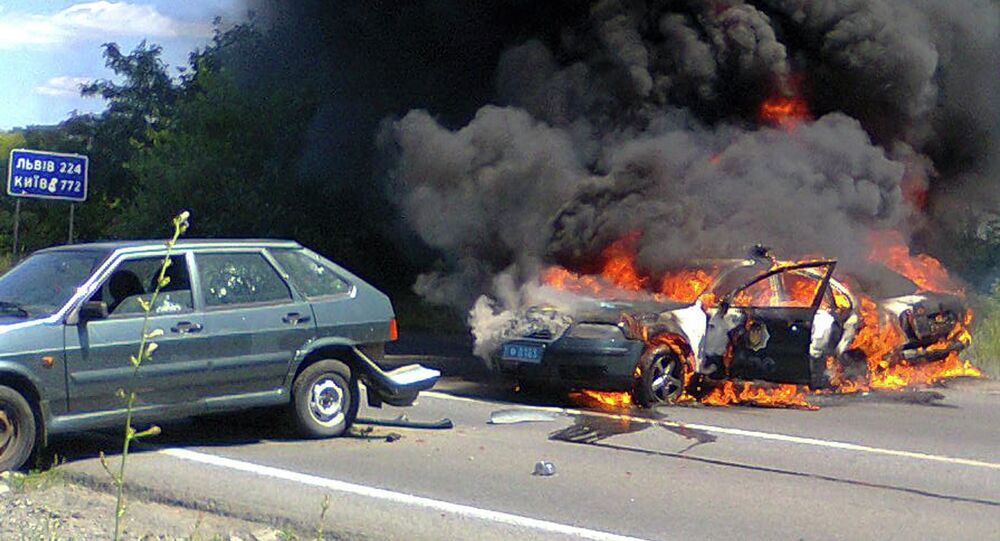 The head of the Right Sector in the Zakarpattia region confirmed the group was involved in the incident, and that the local police opened fire on them without warning.

Earlier on in the day, Ukrainian media reported that one person was killed and nine injured in Mukachevo, after some unidentified people seized a local sport complex and exchanged gunfire with police. Anton Herashchenko, an adviser to the Ukrainian interior minister, said that three attackers were killed and three policemen and four civilians were injured in Mukachevo.

The mayor of Mukachevo later added that a total of 10 people were injured during the shootout, including five civilians and five members of law enforcement agencies.

Alexander Sachko, the head of the Right Sector group in the Zakarpattia region confirmed that the group's members were involved in the incident and said that the local police opened fire on them without warning.

© Sputnik / Alexandr Maksimenko
Right Sector Announces Creation of New Battalions
"After fierce fighting, two Right Sector fighters were killed, four – wounded, two of them – seriously. Having taken the dead and wounded with them, the unit [members] fought their way out from the bandit’s encirclement," the paramilitary group's press service said.

The press service also said that currently the whole Right Sector movement has been placed on high alert "and will not allow anyone to shoot off its brothers."

"A rally is being gathered near the [building of] the administration of the president of Ukraine to oppose what is going on now, because it is terror… We will welcome everyone who comes," Artyom Skoropadsky told RIA Novosti.

The group demands the immediate arrest of Ukrainian lawmaker Mykhailo Lanyo, who, they believe, is directly linked to the shootout, as well as all the police officers who took part in the incident or ordered it.

A spokesman for the Right Sector's Ukrainian Volunteer Corps, Andrei Sharaskin, said in an interview with Ukraine’s 112 television that the incident in Mukachevo was linked directly to the efforts by his group to block smuggling routes in the region. Sharaskin also said that Right Sector members fighting against smuggling repeatedly received threats.

The Ukraine's Security Service (SBU) said that the country’s prosecutor general launched an investigation into the Mukachevo shootout.