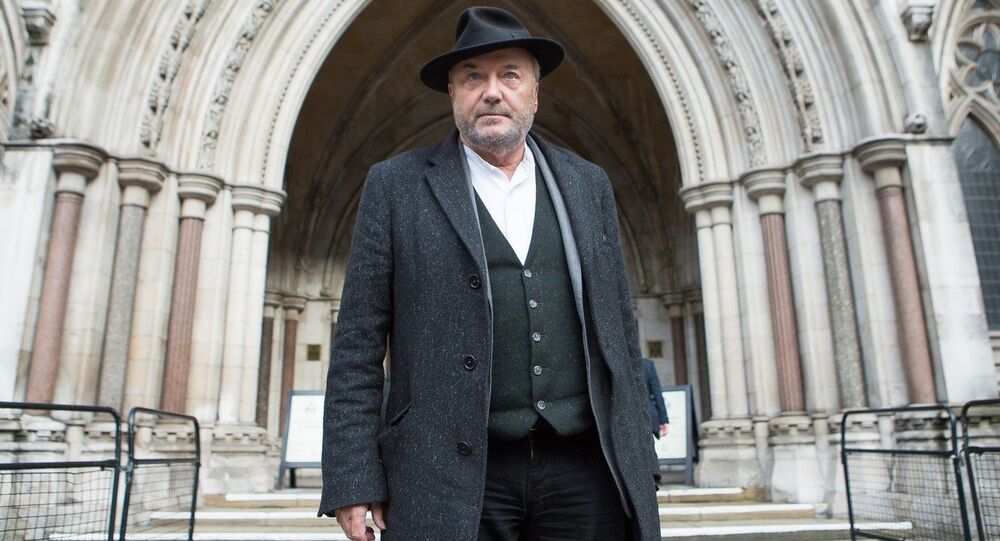 Commenting on the scandal around accusations that the BBC has become an 'arm of the British government,' politician, broadcaster and writer George Galloway told Sputnik that there's nothing inherently wrong with being a state broadcaster, so long as you don't pretend that you're not while trying to discredit others for being state broadcasters.

© AFP 2020 / NICOLAS ASFOURI
BBC Refuses to Comment on Accusations of Growing Closer With Government
Earlier this week, the BBC announced that it had worked out a deal with the country's Conservative government, taking on the 600 million pound-plus yearly cost of providing free television licenses for pensioners over age 75, in exchange for raising the cost of the mandatory license fee in line with inflation. The country's Labour Party slammed the move, saying that it threatens the broadcaster's independence.

"The decision to force the BBC to become effectively a department of government in delivering services to [people over age 75] is of course a retrograde step," Galloway stated, "but my point would be that it merely illuminates a truth which has long existed –namely, that the BBC is not independent at all, and therefore the Labour Party's comment that this threatens the BBC's independence is odious."

Galloway noted that "the British government appoints the head of the BBC, and the BBC is [therefore] expected, on all important matters, to cleave to the prevailing orthodoxy, which the government at any one time represents, and this affects their coverage in news terms very blatantly."

Galloway used last year's protests against the Israeli military action in Gaza to illustrate his point, noting that despite the fact that the protests took place "right outside the BBC headquarters' front window," the BBC did not cover the event in any significant way, "because it was not the policy of the British government to in any way contribute to the rising feeling in the country that the massacre was completely unacceptable, and British government support for it even less so."

Asked to comment on Western media commentators' accusations that the Russian media serves as the 'Kremlin's propaganda mouthpiece', Galloway noted that if this is the case, "the BBC is Westminster and Whitehall's mouthpiece. There's nothing inherently discreditable about being the mouthpiece of one's own state. What is discreditable is to pretend that you are not, whilst rubbishing others who are." In Galloway's view, the fact that the BBC does this is a sign of their own hypocrisy.

chiefmoamba
Former Chair: BBC Caved in, Should've Stood up to Government Demands
Commenting on Britain's system of mandatory television licenses, used to subsidize the BBC, Galloway noted that "as someone of the left, you may be surprised to hear me say that I agree with the criticism that much of the BBC doesn't need to be in the state sector at all. Given the rapidly diverging pattern of consumption of media, news, entertainment and culture, a gigantic monolith [which is] unresponsive, unaccountable, unelected is not a good idea in itself…To force every person in the state to pay now well over 100 pounds, on pain of imprisonment, to keep this giant monolith, with its establishment stooges and flunkies, is increasingly difficult to defend."

Ultimately, Galoway believes that "half-way through the second decade of the 21st century, this is not a realistic way to fund the state broadcaster. It's a poll tax and its regressive. Everyone pays the same, whether they're a multimillionaire or a poor pensioner, and it is unconscionable in itself. I don't want to pay for a broadcaster which is utterly biased, in favor of the prevailing orthodoxy which I earlier talked about, and which I entirely disapprove of and disagree with. "