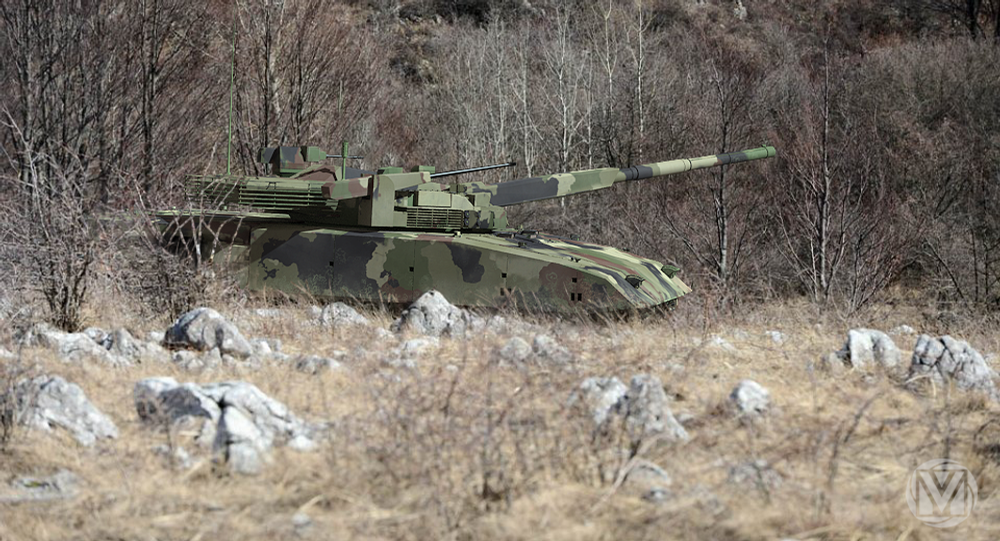 A concept of the Russian Armata-like "Serbian tank of the future", the М-20UP-1, has reportedly been presented at the Partner 2015 military exhibition in Belgrade.

© Photo : Russian Defense Ministry
Armata Tank, T-15 Infantry Combat Vehicle The Only to Survive in Modern War
Serbia has presented a concept of the М-20UP-1, the country's "tank of the future", at the Partner 2015 military exhibition in Belgrade. Designers said that they were inspired by the Russian-made Armata tank when developing the М-20UP-1, according to the Serbian news website Vecernje Novosti Online.

The project cost of the production of one M-20UP-1 stands at five million euros.

Goran Stojanovic, head of the working group to develop the tank, said that the М-20UP-1 will not compete with the Armata tank.

"Our tank will be closer to the [Russian-made] T-90 tank in terms of combat capabilities. We are short of money, and our economic potential is not developed enough to let us compete with the Russians. But by using a design [resembling] those of advanced tanks across the world, we have developed the weapon of the future: cheap, modern and efficient," Stojanovic said.

As in the T-14 Armata battle tank, the М-20UP-1's crew of three is securely enclosed in a multi-layer armored capsule, separated from the ammunition container.

The Serbian tank also features an unmanned, digitally controlled turret, which is remotely controlled by a crew member located in the aforementioned capsule.

mil.ru
Modern Warfare: Russia's T-15, Armata Tank's Younger Brother
The tank's 125mm smooth-bore gun is also digitally operated from the capsule via high-resolution cameras. The turret carries a total of 48 rounds of ammunition, including ready-to-use ones. The gun can also fire laser-guided missiles.

The М-20UP-1 is equipped with electric transmission, which engineers said will help significantly reduce the power loss and will add to the tank's stealth characteristics.

It reportedly took eight months to finalize the М-20UP-1, which was developed both by young and veteran Serbian engineers, who were engaged in the creation of the M-84 battle tank.

The М-20UP-1 will form a base platform for other Serbian armored vehicles, as is the case with the Russian-made Armata platform.

Earlier this year, similar plans were announced by India, which seeks to use the platform of its planned battle tank for as many as 11 different tracked vehicles.