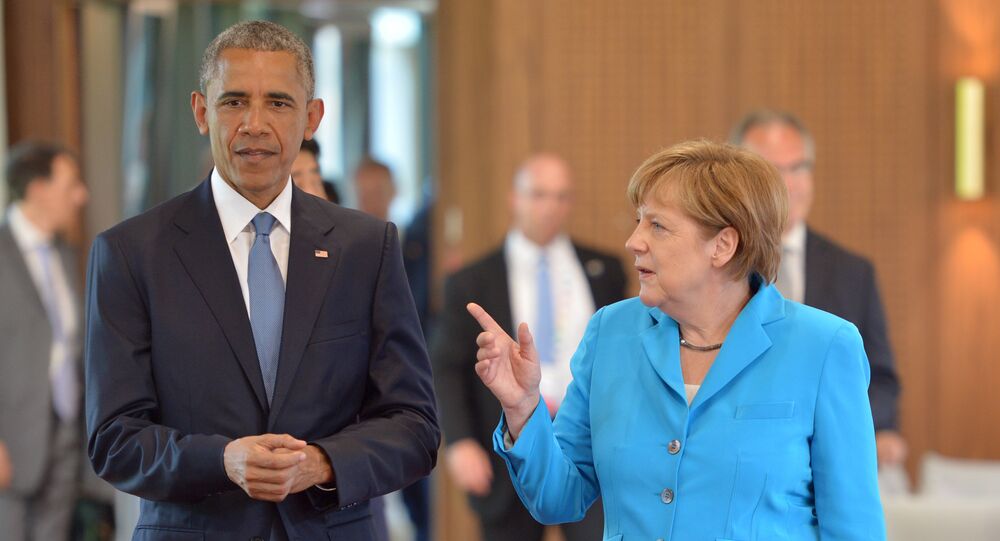 German parliament member Alexander Neu told Sputnik that the country's head of government is betraying German interests by staying quiet on the NSA spying scandal which saw her and other officials' phones hacked.

By apparently ignoring the NSA spying scandal, German Chancellor Angela Merkel appears to be catering to the interests of the US rather than Germany, German parliament member Alexander Neu of Die Linke (Left Party) told Sputnik.

"It can't be that all this espionage, all this wiretapping, which impacts not only her personally, her government and the previous government, but also society as a whole, the economy and her colleagues from other countries simply passes over her like water of a duck's back. It's obvious that she has no will to effectively counteract this," Neu said.

© AFP 2021 / Julian Stratenschulte
NSA Listened as Aides Secretly Briefed Merkel on Euro-Finance Plan
"She swore on Germany's constitution that she obliges to preserve the interests of the German people, but apparently abides by the interests of the American presidential administration. And this is something other than what we reproach her about," he added.

Neu also said that it is completely unacceptable for US intelligence services to wiretap German businessmen. Social protest against the chancellor's inaction is also growing, even as only a few parliamentary parties are attempting to pursue the issue.

"We already have at our disposal the so-called selector list, which has 40,400 names on it. But the Bundestag has no access to these lists. We are the elected body of our country, with controlling authority over the government, but it seems that we can't fulfill our supervisory functions. Our government must ask the US if it would provide these lists to the Bundestag," he said.

© AFP 2021 / DOMINIQUE FAGET
Nobody in Europe Confronts US Espionage - French Senator
"This is absurd. The US says 'no, we won't allow this,' and the federal government proposes involving an intermediary, a former judge if I'm correct, who would familiarize himself with the lists and retell to the parliamentarians who are members of the NSA spying scandal commission what is written there. But the members of the commission themselves cannot familiarize themselves with the list. This is a real scandal," he added.

According to Neu, the escalation of tensions between Russia and the US in Europe do not show that either side wants war. Instead, the desire of the US to show "who the boss is" in Europe ran counter to a line Russia drew on Ukraine, Neu said.