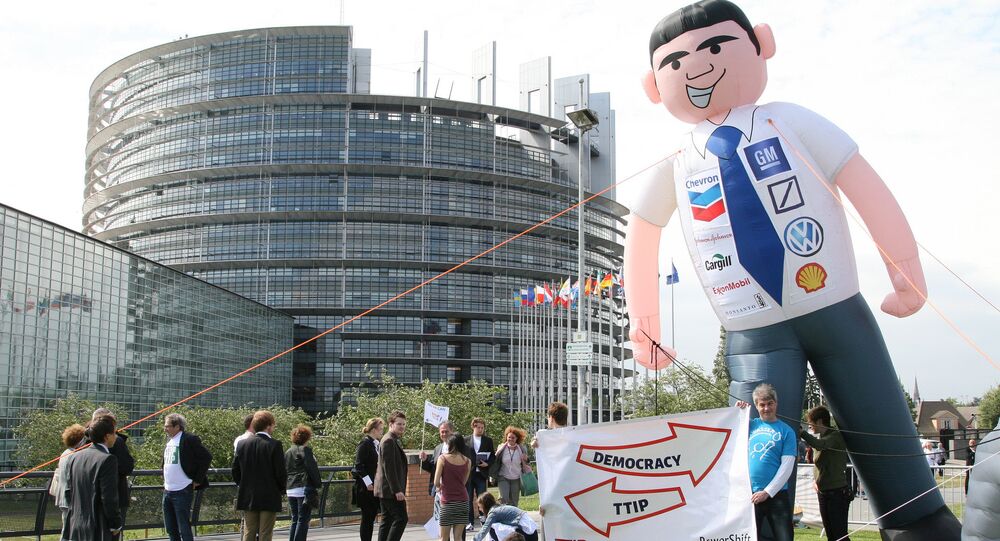 Members of the European Parliament (MEPs) have voted in favour of passing a resolution on the controversial EU-US trade deal.

Following a delay on the vote for the Transatlantic Trade Investment Partnership (TTIP) due to political divisions in the European Parliament (EP), MEPs have now approved its recommendations for the European Commission TTIP deal by 436 votes to 241, highlighting a continuing split among MEPs on the issue.

The reasons initially cited for the delay was that there were numerous amendments to the proposal and MEPs needed more time to consider the deal.

Described as both "toxic and controversial" by Global Justice Now, the European Parliament says that the EU-US trade deal "must open up US market access for EU firms, but must not undermine EU standards."

The conflict between the EU and the US regarding the TTIP deal centers on the use of judges to settle disputes between governments and companies that feel they have been treated unjustly.

Protesters and politicians are concerned that the companies will be able to wield too much power over governments, undermining the rule of law.

But to settle trade-related disputes, MEPs have voted for a new justice system that will be run by publicly appointed judges and will be "subject to scrutiny and transparency rules… [replacing] private arbitration under the Investor-State Dispute Settlement (ISDS) system."

"Unprecedented globalization is under way and our citizens and businesses are right in the middle of it," said rapporteur German Social Democrat MEP, Bernd Lange. "As parliamentarians, it is our democratic duty to shape this process.

"We insist that the right of lawmakers on both sides of the Atlantic to legislate must not be undermined by private arbitration courts or other bodies."

"We have given clear guidance for the Commission on what kind of deal we want. And if, at the end of the day, the agreement is bad, we will reject it. If it's good, we will vote in favor," he concluded.

But MEPs stressed that there can be "no agreement" in areas where US standards are "very different" to European standards. That includes certain chemicals, food products, using hormones in animals or cloning.

More than 2.3 million people have signed a European Citizens’ Initiative calling for an immediate end to TTIP negotiations to stop the EU from entering a "secretive trade alliance" with the United States — which is accused of using the deal to further its goal for global domination.

According to Nick Dearden of Global Justice Now, “the European Parliament vote today is no way binding towards the final outcome of TTIP. Public opposition to TTIP is continuing to mushroom at an astonishing rate and will prove decisive in stopping this toxic trade deal from going through.

"The fact that pro-TTIP politicians like Martin Schulz are prepared to use such dirty political tricks to railroad this toxic trade deal through means that the enormous coalition that has formed across Europe in opposition to TTIP is going to have to up its game, and that’s what’s going to happen."

"EU parliamentary leaders will try to spin this report as real departure on ISDS — but it's nothing of the sort. If enacted, this would still hand massive powers to tens of thousands of US corporations to sue our government."

Dearden believes that "the only reason that MEPs are still trying so desperately to push this through is because of the enormously powerful corporate lobby machine in Brussels.

"TTIP is fundamentally an issue of people and democracy versus encroaching corporate power."

According to the European Parliament, MEPs want to continue TTIP talks "but reiterate that they need to deliver an 'ambitious' and 'balanced' deal, which increases market access for goods and services and also access to public procurement markets, with benefits shared across EU member states."

Our reaction to the #TTIP vote in the European Parliament today http://t.co/WXOf1FWHjD #NoTTIP #ISDS

Meanwhile John Hilary, director of campaign group War on Want says "TTIP offers a nightmare vision of a world sold into corporate slavery. If our elected representatives betray us by backing this vision, we will have no choice but to escalate the campaign."

"More than 2.3 million people across Europe are calling for an end to TTIP negotiations in the biggest trade campaign we've seen to date. Yet MEPs have chosen to ignore the wishes of their own constituents, siding instead with the business lobby against the people of Europe."

Secret documents recently released by Wikileaks suggest that it’s not just the wishes of European citizens that are being ignored. Documents detailing negotiations on the global Trade in Services Agreement (TISA), reveal that all BRICS countries — Brazil, Russia, India, China and South Africa — are absent from the negotiations involving the US, the EU and 23 other countries.

The tenth round of the EU-US trade negotiations on the TTIP is scheduled for 13-17 July 2015 in Brussels.

EU Needs Protectionism in TTIP Trade Talks With US - Source