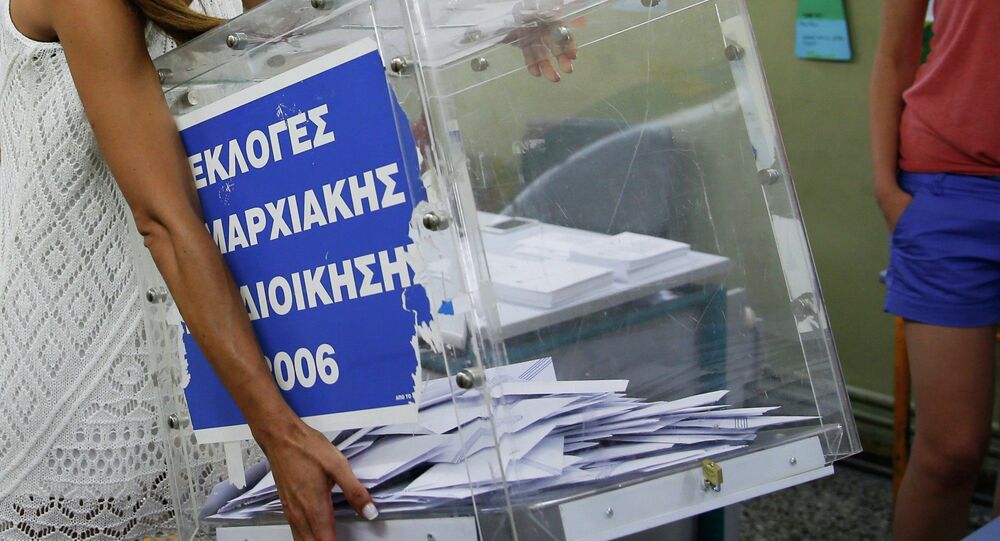 From 49.5 to 54.5 percent of voters in Greece said "No" to the bailout proposals tabled by the country's international creditors, while from 45.5 to 50.5 percent voted in favor of the deal, the results of four opinion polls showed Sunday.

ATHENS (Sputnik) — On Sunday, Greek voters have been taking part in a referendum to determine whether Greece should accept the lenders-proposed bailout plan that envisages serious spending cuts and tax increases.

First polls. NOT exit polls. NO is ahead. (Orange color) #Greferendum pic.twitter.com/29kTRvH6N8

"The overall estimate is that "No" vote is leading," sociologists told ERT TV channel.

Some closer than others, but all polls in Greece predicting a win for no. #greferendum pic.twitter.com/6eW6ZaWjDI

Greece is one of the countries hit worst by the 2008-2009 financial crisis. The country’s overall debt stands at about $350 billion, of which $270 billion is owed to the European Central Bank (ECB), the International Monetary Fund (IMF) and some eurozone countries.

Everyone @ press HQ getting excited. But will be a while before solid results; these are just tel polls. #Greferendum pic.twitter.com/2KrhScU7Nt

© AP Photo / Giannis Papanikos
'Nai' or 'Oxi'? Voting Ends in Greece's Bailout Referendum
At least 40 percent of the registered voters should take part in the voting for the referendum to be declared valid. According to unofficial data, the turnout is some areas reached 50 percent.

A source in Syriza party told RIA Novosti earlier in the day that no official exit poll was being held, as the country lacks relevant experience. The previous referendum in Greece took place in December 1974.

Over 19,000 polling stations were open for 9.8 million of registered voters in the austerity referendum.

The Greek Interior Ministry, reported no incidents during the Sunday referendum.