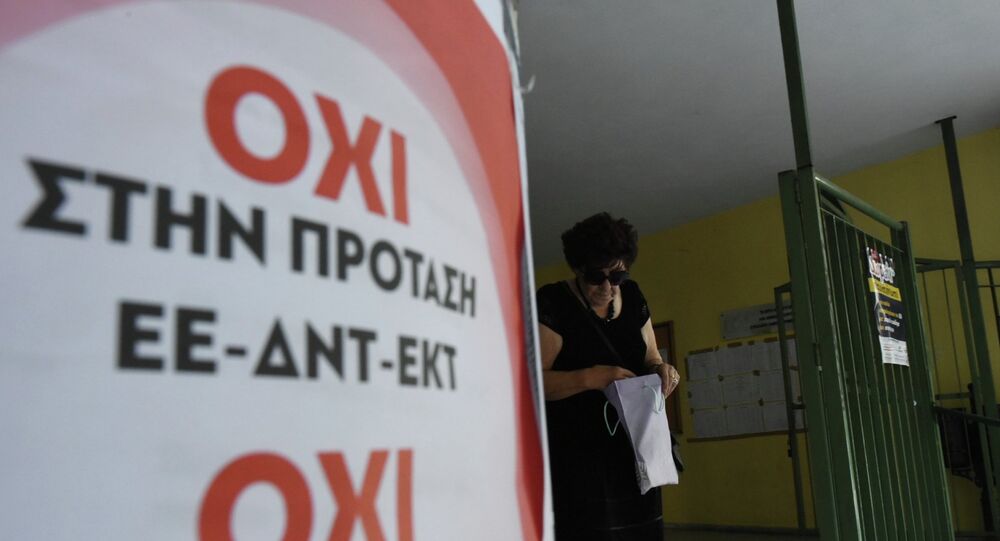 On Sunday, Greek voters are taking part in a referendum to determine whether Greece should accept the lenders-proposed bailout plan that envisages serious spending cuts and tax increases.

ATHENS (Sputnik) — The majority of Greeks voted against the lenders-proposed bailout plan at the Sunday's referendum, opinion polls suggest.

Greeks wait in line to vote in referendum. It's calm. Apprehensive., pic.twitter.com/2AHy8LAQ2q

According to one of the polls obtained by RIA Novosti, the “No” vote is leading with a margin of 7-8 percent. Another poll suggests that the margin stands at 4 percent.

Some too young to vote have accompanied parents to participate in this big moment for #Greece. #Greferendum pic.twitter.com/NaYaJFspRu

However, the referendum is underway and the people's preferences may change during the day.

"We can say for sure that the victory of the 'No' vote has been decided," a source who provided the data told RIA Novosti.

© AP Photo / Giannis Papanikos
'Nai' or 'Oxi'? Voting Ends in Greece's Bailout Referendum
Four opinion polls published on Friday had the 'Yes' vote marginally ahead; a fifth put the 'No' camp 0.5 percent in front, but all were well within the margin of error.

Many analysts believe the last-minute change in the public mood was prompted by a major pro-government and anti-austerity rally held in front of the Greek Parliament on Syntagma Square, where Prime Minister Alexis Tsipras, elected in January on a promise to end years of austerity, urged an estimated 60,000 supporters packing the downtown square to spurn the tough terms of an aid deal offered by international creditors.

Approximately 10 million Greek citizens aged 18 and over will cast their votes until 7:00pm local time (16:00 GMT) Sunday to decide whether to accept austerity measures proposed by creditors with a ‘yes’ or ‘no’ to euro currency referendum expected from 18:00 GMT.