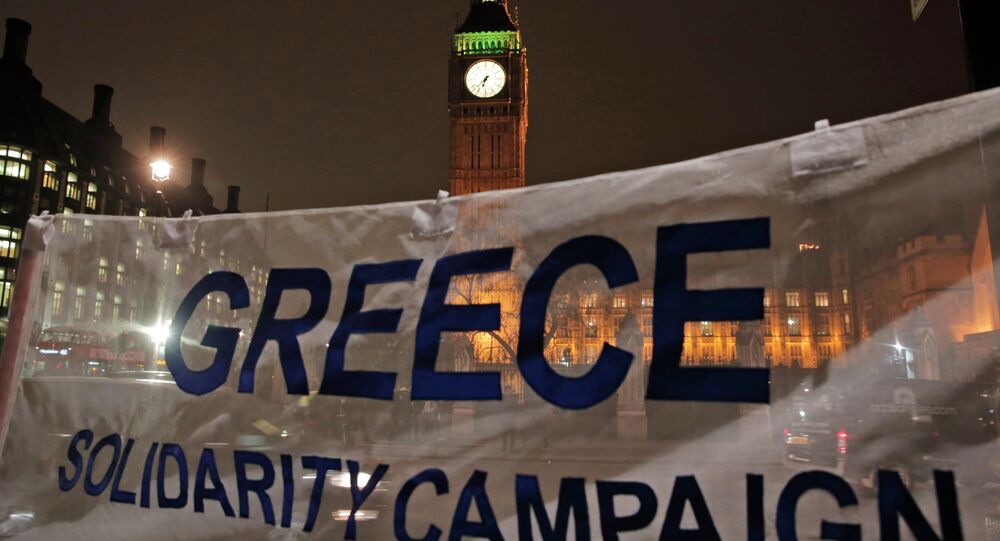 Greeks, residing in the United Kingdom, held a rally on Saturday in solidarity with Greece ahead of a bailout referendum.

LONDON (Sputnik) — Greeks, residing in the United Kingdom, held a rally on Saturday in solidarity with Greece ahead of a referendum on whether to accept or reject international creditors’ cash-for-reforms proposal, a RIA Novosti correspondent reported.

© REUTERS / Alkis Konstantinidis
Greece Faces Restless 'Day of Silence' Before Fateful Referendum
The rally took place in the centre of the British capital, in Trafalgar Square. It was organized by Greece's Solidarity Movement. Those, who gathered there, held posters with "NO" written in capital letters, urging to vote against the European lenders’ scheme.

On Sunday, Greek voters will take part in the referendum to decide whether the debt-ridden country should accept its creditors' demands for spending cuts and tax increases in exchange for financial aid.

The referendum comes after the country failed to unlock financial assistance from its creditors on Tuesday that made a $1.7-billion loan repayment to the International Monetary Fund (IMF) impossible.

Greece owes about $270 billion of its total $350-billion debt to the European Central Bank (ECB), the International Monetary Fund (IMF) and Eurozone nations.