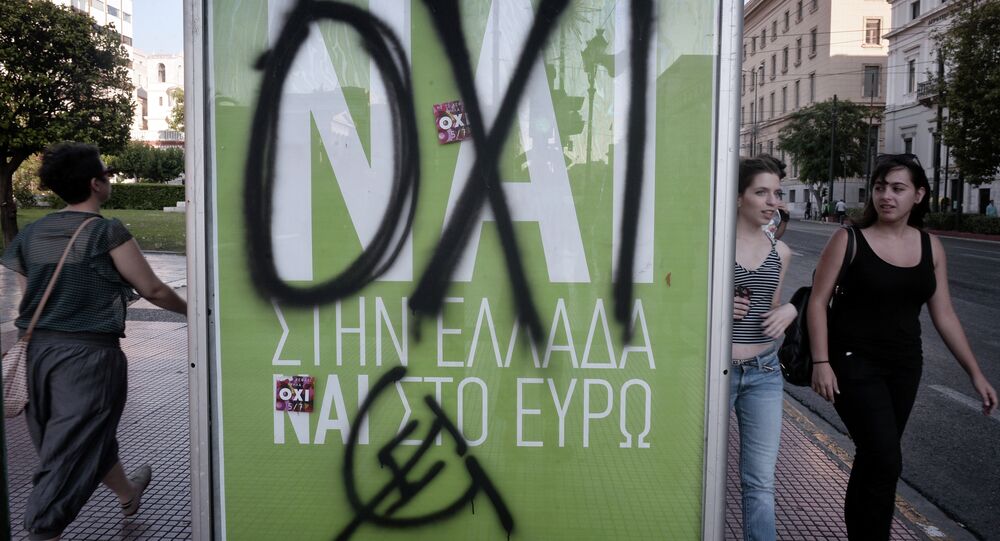 The Greek polling firm Greek Public Opinion was cited in the media this week in a way that portrayed the 'yes' vote in Sunday's euro referendum as being in the lead; however, it complains the findings were incomplete and leaked without its knowledge.

© AP Photo / Giannis Papanikos
Greek Supreme Court to Rule on Legality of Bailout Referendum
The Greek polling company Greek Public Opinion [GPO] released a statement on Thursday to say that the poll results reported in the media on Wednesday showing more Greeks ready to vote 'yes' in Sunday's referendum on Greece's debt negotiations, were incomplete findings and released without its knowledge.
© REUTERS / Jean-Paul Pelissier
Yes Vote on Bailout Referendum Slightly Ahead in Greece – Poll
According to charts, which are purportedly from GPO, 47.1 percent of respondents intended to vote 'yes' in the referendum, and accept the proposals of Greece's creditors, compared to 39.3 intending to vote 'no.'

The poll also asked respondents, "Should Greece remain in the Eurozone no matter what the sacrifices?" to which 74.2 percent replied yes, 59.9 percent of whom were reported to have said "definitely yes."

On Thursday, GPO said the data from the polling, which it carried out for French bank BNP Paribas, represented only "fragmentary findings," and threatened to take legal action over the poll's publication.

The most recently released Greek opinion polls have shown a close split in voting intentions; according to the results of a poll conducted by the polling institute Alco and released on Friday, 44.8 percent of respondents favored a 'yes' vote and 43.4 percent were in favor of 'no'. Another survey carried out by the University of Macedonia showed 42.5 percent ready to vote 'yes,' and 43 percent ready to vote against the proposals.