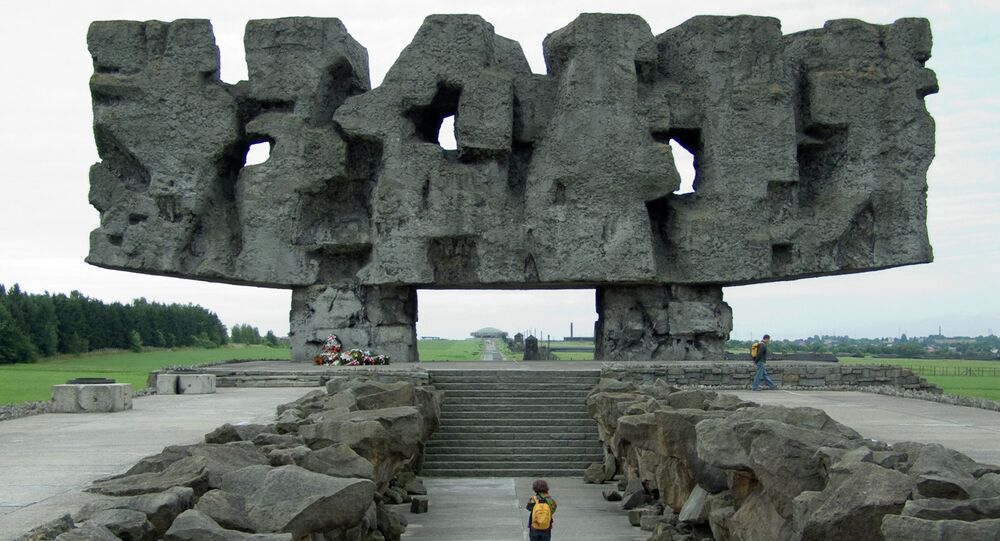 A 17-year-old Ukrainian student is due to be deported from Poland for snapping a photo of himself waving his middle finger at a memorial dedicated to Jews who were exterminated at the Majdanek death camp during World War II.

© AP Photo / Czarek Sokolowski
Polish Envoy Sends Protest Letter to FBI Chief After Holocaust Remarks
Polish prosecutors have opened a case against 17-year-old Ukrainian student Vladislav Kucher, who currently faces deportation from the country for publishing an insulting photograph of the deed on a social networking website.  In the photo in question, he 'flips off' a memorial to Jews who were systematically executed at the Majdanek concentration camp during the Second World War, Ukrainian media reported.

Kucher posted the photo, along with a brief offensive post, on the social media site VKontakte on June 28, provoking a wide public outcry in Poland, including the city of Lublin, where Kucher was the student of a local technical school. His gesture of disrespect resulted in his immediate expulsion.

The obscenity-laden post was related to Kucher visiting the Majdanek Memorial, which honors the 60,000 men, women and children who were killed there during World War II.

© AP Photo / Czarek Sokolowski
Watch towers and a barbed wire fence of the former Nazi death camp Majdanek outside the city of Lublin in eastern Poland on Wednesday Nov. 9, 2005

A whole array of prominent Polish public figures expressed indignation about Kucher's photo, with many urging the authorities to expel Kucher from the country as soon as possible.

"I have a vague feeling that the people of this kind are entirely indifferent to those who were killed, or stand to be killed. Today, they hate Jews and Poles; tomorrow, they will be ordered to hate others. And I think that the Ukrainians themselves must deal with this person," one angry commentary said.

© Flickr / Eesti.pl
Polish Holocaust 'Humor' in Estonian Gallery Tests Boundaries of Art
Kucher finally deleted the post and posted a new one, where he apologized for his actions and explained that he decided to take an insulting photo because he allegedly "dislikes Jews."

Majdanek, or KL Lublin, was a Nazi concentration and extermination camp, formed on the outskirts of Lublin during the German occupation of Poland in World War II. The camp was liberated by Soviet Red Army Troops  in July 1944.