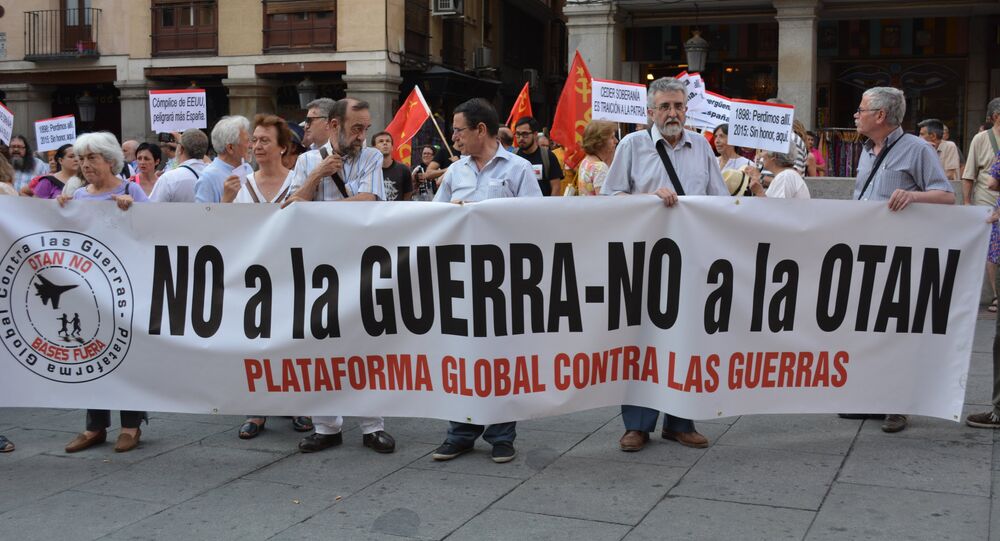 Spain and the United States signed an agreement two weeks ago that will increase the US military presence on the base at Moron de la Frontera and give American armed forces a permanent stay.

Several dozen people gathered on the square in front of the Spanish Foreign Ministry to protest the extension of the presence of US troops at the base of Moron de la Frontera (Seville) indefinitely.

The protesters held posters which read "No to War — No to NATO" and "Spain for sale".

"Imperialism is terrorism," "No NATO! Base out!" the activists shouted.

© AFP 2021 / PIERRE-PHILIPPE MARCOU
Madrid, Washington Ready to Agree Permanent US Military Presence in Spain
The agreement envisages the possibility of increasing the US presence at the joint base up to 3,000 soldiers in the event of a "crisis situation." This will require additional authorization of the Spanish authorities.

The presence of 2,200 soldiers (and 500 civilians) is guaranteed without authorization. The agreement also provides for an increase in the number of US military aircraft up to 26.

"I came here to express my disagreement with the Spanish government, which, in fact, let Americans have the base at Moron. NATO is a symbol of imperialist aggression. We believe that the base at Moron will be used to plunder the African people," one of the protesters, Eduardo, told RIA Novosti.

The document has to be approved by the Spanish Parliament. But as the People's Party has a majority (the faction has always fostered stronger ties to the US), the voting results will be quite predictable.

Washington, Madrid Sign Agreement on Housing US Marines at Spain's Air Base