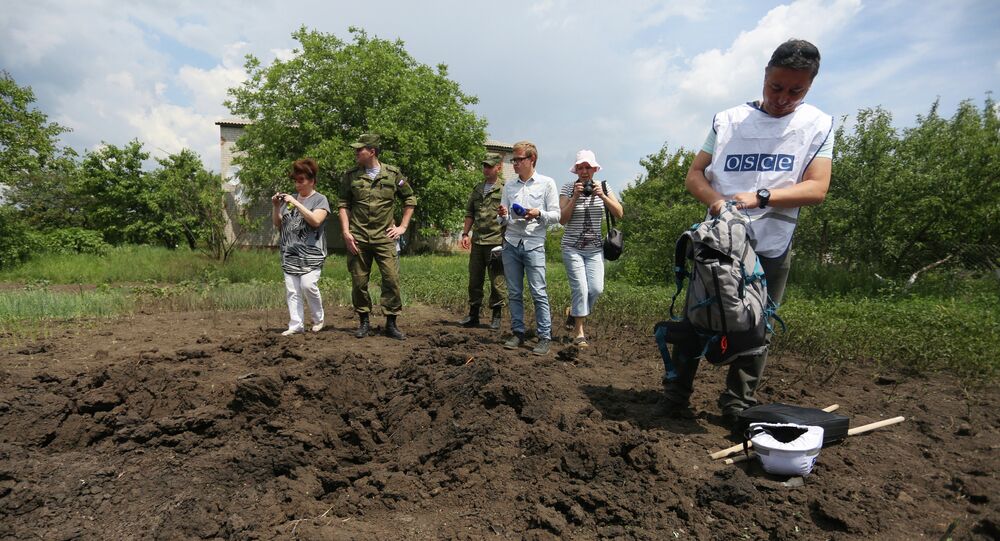 Following the explosion at a chemical factory, the Ukrainian government has urged the OSCE to monitor the levels of radiation over Donetsk.

The Ukrainian government urged the Organization for Security and Co-Operation in Europe (OSCE) to monitor the level of background radiation after the explosion at the Donetsk factory of chemical products.

The factory manages the disposal of ammunition, upgrade and repair of ammo. The factory also produces industrial explosives.

“For a long time now the concentration of ammunition and explosives in the areas of the factory had reached almost critical level. For over a year the plant has been a threat to the entire region,” read the Facebook statement posted by the headquarters of Kiev’s special military operation in southeastern Ukraine.

© Sputnik / Grigoriy Vasilenko
Ghost of Chernobyl: Ukrainian Forces Warn of Possible Radiation Leak in Donetsk Area Amid Ceasefire Violations
It was earlier reported that an explosion that occurred at a Donetsk chemical factory on June 16 could have led to damages at the radiation storage site as it triggered the detonation of underground ammunition depots.

“This situation is causing great concern of the Ukrainian side, because there is a possibility of leakage of radioactive elements that are very dangerous to the health and life of a large number of civilians in the region,” Ukrainian Maj. Gen. Andriy Taran was quoted as saying in a Facebook statement posted by the headquarters of Kiev’s special military operation in southeastern Ukraine.