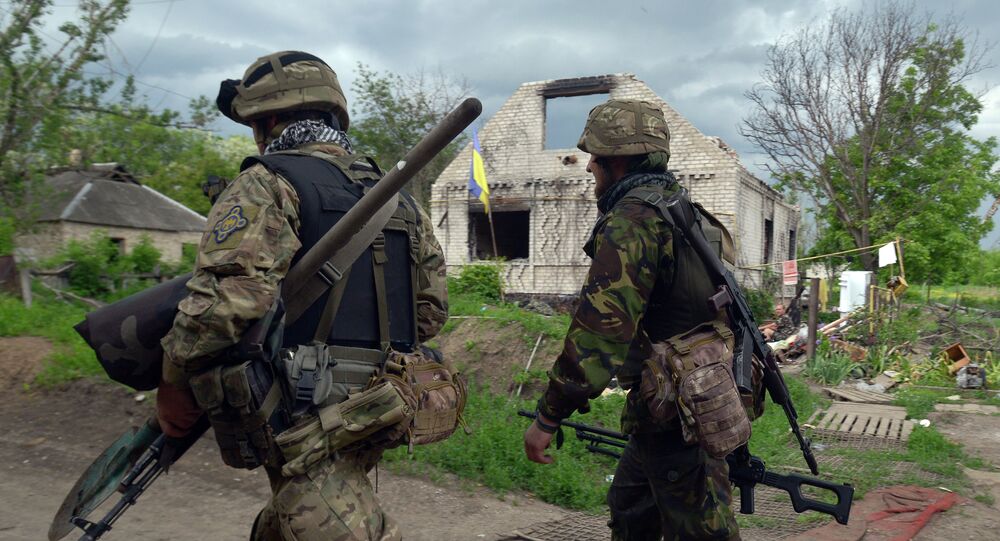 It will take a strong US- and G7-led coalition to end Russia’s alleged violation of international law and the existing world order, Ukrainian ex-Foreign Minister Andriy Deshchytsia said on Saturday.

© AFP 2021 / ANATOLII STEPANOV
Ukraine to Start Another Army Mobilization
If the Minsk-2 format falls through the worst may come to the worst, and Ukraine will find itself unable to contain Russia without the United States and other Western nations joining in the fray, Andriy Deshchytsia, Ukraine’s current ambassador to Poland, warned the participants of an international conference on European security in Warsaw.

“What we have in Ukraine now is not a Cold War but a real war with shots fired every single day,” he said, as quoted by Wirtualna Polska web portal, adding that during the Cold War diplomacy prevailed and no one was openly shooting at each other.

Saying that Crimea’s 2014 reunification with Russia set off the war in Donbass, the Ukrainian ambassador to Poland admitted that even though bringing the region back into Ukraine’s fold now was a mission impossible, the matter could eventually be brought up with the participation of “international organizations.”

The first and most optimistic one was the implementation of the Minsk accords.

The second, less optimistic option, was to “freeze” the conflict, like it was done in Abkhazia and South Ossetia, which would mean a new Cold War for Ukraine, Deshchytsia warned.

And, finally, the third and least optimistic, though most likely, scenario, was the resumption of hostilities in Donbass, where the shaky ceasefire is being broken almost on a daily basis.

“Poland is coordinating the western countries’ effort to end the war. It is working to keep in place the sanctions regime,” the Ukrainian ambassador said, accusing Russia of trying to exclude Poland from the negotiating process,” Wirtualna Polska quoted the Ukrainian envoy as saying on Saturday.

Russia, meanwhile, deems it very important to avoid any actions that may trigger the escalation of the situation in Ukraine, and to focus on the implementation of the Minsk agreement.