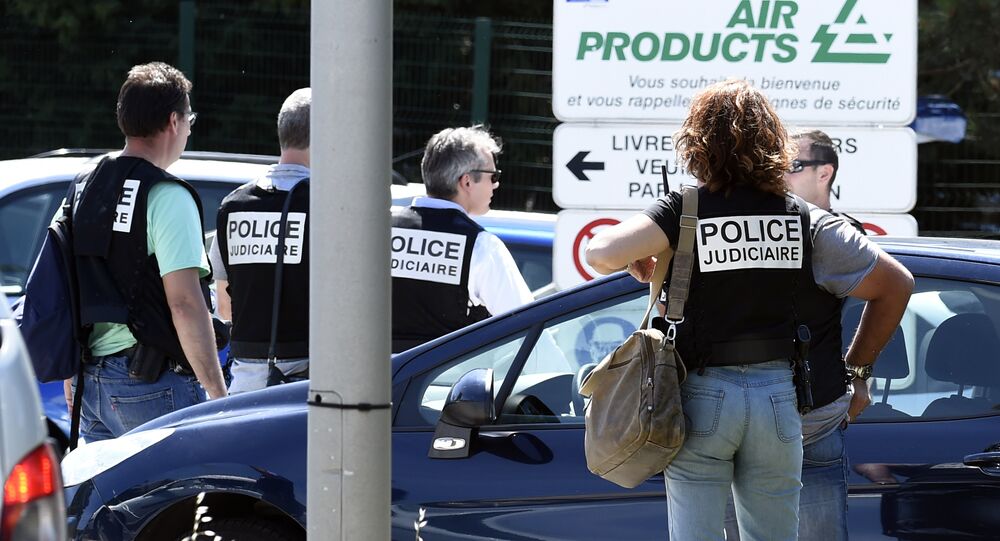 Another terrorist attack rocked France Friday, six months after Islamist shootings on the office of the Charlie Hebdo magazine took 12 lives in Paris.

MOSCOW (Sputnik) — On Friday, an individual identified as local resident Yassin Salhi, caused an explosion by driving a car into a warehouse filled with canisters containing gas at a US-owned gas factory near France's second-largest city of Lyon.

A decapitated body and an Islamist flag were found by the investigators at the scene of the incident. A man's head was recovered nearby, covered with Arabic inscriptions.

"Yassine S. had established ties with Salafi movement of Lyon," Francois Molins, the Paris prosecutor, said later in the day at a press conference.

He added that the suspect was the subject of an arrest warrant between 2006 and 2008 due to the ties with radical Islamists. According to the official, between 2011 and 2014, Yassin Salhi was under intelligence service surveillance.

The attack triggered an active political discussion inside the country, still on high terror alert after the deadly January Charlie Hebdo attack in Paris.

The leader of France's right-wing National Front party Marine Le Pen stressed that marches, slogans and declarations must "give way to action" to stop Islamic fundamentalism.

"Nothing has been done for years against Islamic fundamentalism… [I call for] firm and strong measures taken immediately to defeat Islamism," Le Pen, the leader of the third-largest political party in France, said in a statement following the assault.

President Francois Hollande stressed that France "will never give in to fear." He added that the country will protect its values, fighting to eradicate those responsible for such acts.