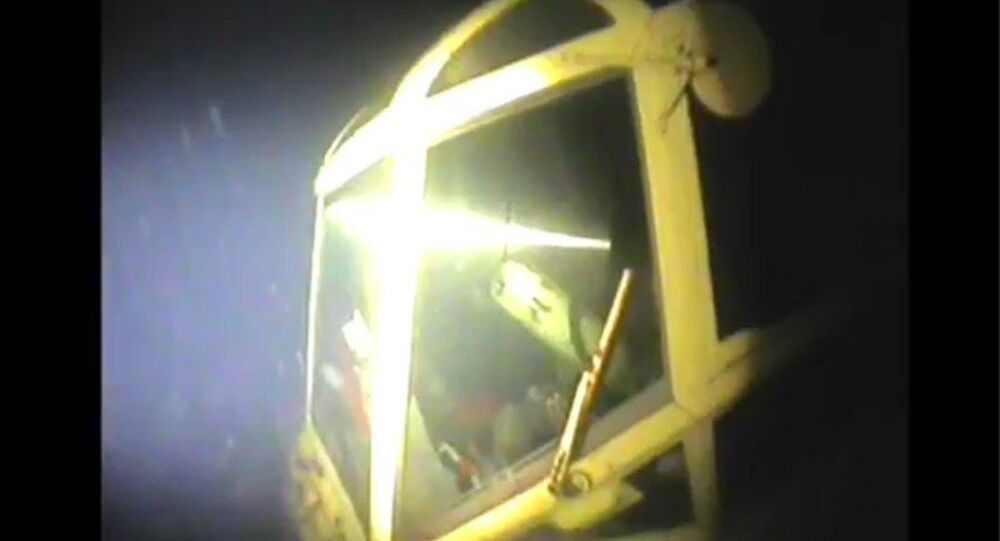 Lithuanian prosecutors have revealed that alcohol has been found in blood of one of the two pilots of An-2 plane which crashed into the Baltic Sea in mid-May; “bottles containing not only mineral water” have been found on board, the body of the second pilot has not been found yet.

Adolfas Mačiulis, one of the two pilots who operated An-2 plane which crashed into the Baltic Sea on May 16, had a blood alcohol content of 0.77 permille, the Lithuanian media quotes Prosecutor Simonas Minkevičius of Klaipėda's Regional Prosecutor's Office as saying.

© Sputnik / Alexandr Kryazhev
Lithuania Resumes Search for Missing Soviet-Made An-2 Aircraft
“Additional tests are being carried out and information is being verified. But these are the initial results,” he added without any further elaboration.

Earlier experts said that Mačiulis had died by drowning.

Artūras Paulauskas, chairman of the Lithuanian Seimas Committee on National Security and Defense also confirmed the above, adding that the video provided by the Dutch company Mammoet, which scanned the sunken aircraft at the request of Lithuania, captured “the bottles containing not only mineral water” on board.

The politician also added that the data provided allows for the possibility that it was not Adolfas Mačiulis who operated the plane, but rather the second pilot, Alvydas Selmistraitis, who is still considered missing.

The Soviet-made An-2 with two highly experienced pilots went missing on May 16, en route from the Swedish port of Gothenburg to the Lithuanian port city of Klaipėda, issuing no distress signal.

The company-owner bought the Soviet-made plane in Sweden and was transporting it to Lithuania for agricultural use.

© CC BY 2.0 / David Rubin / Antonov An-2
Soviet-Era Biplane Mysteriously Disappears in Lithuanian Airspace
Three days later, a Lithuanian military ship detected the aircraft on the Baltic seafloor at a depth of 124 meters (407 feet) and 116 kilometers (63 nautical miles) from shore.

Within two days, the body of one of the pilots was found inside the aircraft and was lifted to the surface.

The Lithuanian state company Oro Navigacija (Air Navigation), which was entrusted with organizing the lifting of the aircraft, turned for help to the Dutch company Mammoet.

The company was reportedly chosen for its vast experience raising the sunken Russian submarine Kursk from a 108 meter depth, carrying out rescue work on the Costa Concordia liner and lifting the wreckage of a F-16 fighter jet, among others.