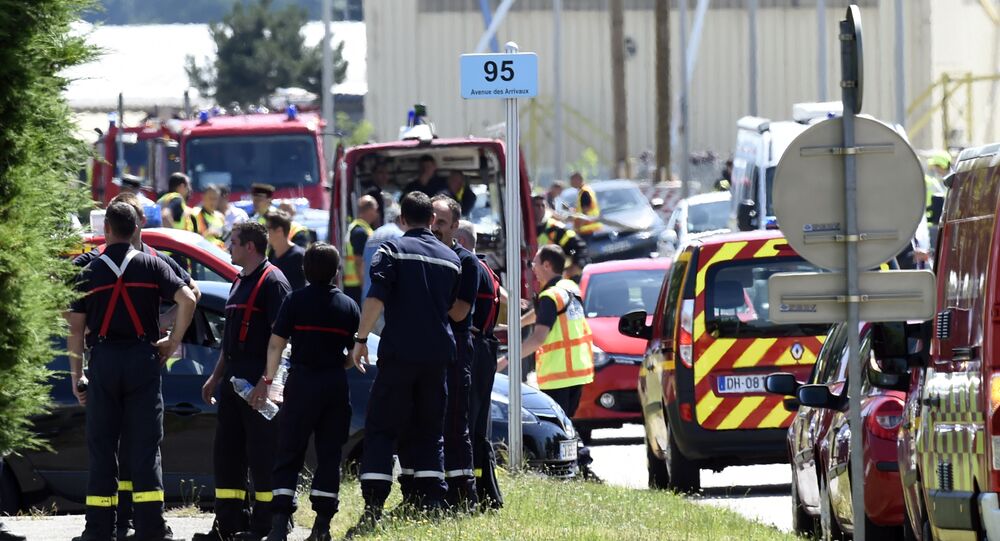 French authorities have opened a terrorism probe into the Friday attack at a gas factory in the country’s southeast that left one person dead and several injured, the French Justice Ministry said.

© REUTERS / Emmanuel Foudrot
One Killed, Several Injured in Alleged Islamist Attack in France – Reports
MOSCOW (Sputnik) – The French anti-terror prosecutor said an investigation was opened into the attack carried out by "a terrorist group."

Earlier on Friday, French BFMTV reported that one person was beheaded and several injured in an alleged Islamist attack on the gas factory in Saint-Quentin-Fallavier. An Islamist flag was reportedly found near the factory entrance and the head of a man was covered with Arabic inscriptions.

France has been on high alert following the January attack on the office of Charlie Hebdo magazine in Paris that left 12 people dead.

A 30-year-old suspected assailant has been arrested following the attack and fire at the Seveso factory in Isere near the French city of Lyon.

A decapitated body, with an Islamist flag, and a severed head, covered in Arabic inscriptions, had been found on the factory's premises.

French President Francois Hollande was reported to have canceled his trip to Brussels in the wake of the incident.

France has been on high terror alert following the January attack on the office of Charlie Hebdo magazine in Paris that left 12 people dead.