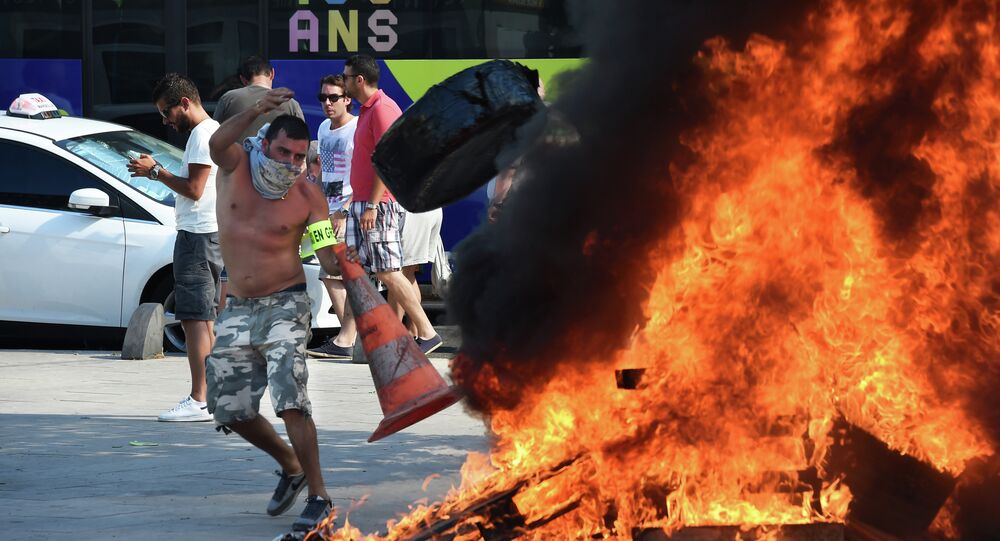 Just when you thought Europe had seen enough drama for one day - there have been chaotic scenes on French roads following protests from taxi drivers against the mobile phone app Uber, with cabbies burning tires, flipping cars and even blocking access to Paris' Charles de Gaulle airport.

Some roads in Paris resembled conflict zones today, with drivers setting up barricades and lighting fires as part of the nationwide taxi strike, which was demonstrating against the use of the US ride-share app Uber, and in particular, the company's low-price UberPOP services.

French taxi drivers, who pay up to $270,000 for their taxi licences, have become increasingly incensed at the expansion of the app in France, which allows private drivers to offer taxi-like services and muscle in on their revenue.

People Seen Walking to the Airport

As part of the demonstration, hundreds of taxis blocked some of France's busiest streets, with reports that some people were walking by foot to reach the capital's Charles de Gaulle airport due to the barricade.

Transport officials later urged any people heading to the airport to do so by train to avoid the risk of missing their flights.

Violence erupted in other instances as angry drivers flipped vehicles on their side, while there were reports of French police having to use tear gas to disperse cabbies from certain areas.

Among those caught up in trouble was American musician Courtney Love, who Tweeted that her cars was showered with eggs as it got caught up in the mob of drivers.

how on earth are these people allowed to do this? the first car was destroyed, all tires slashed and beat with bats, these guys trying to open the doors and the cops are doing nothing?? French Taliban? civil reform needed in France?? I want to go home

Prosecutors have cracked down on the UberPOP service, with a decision in October banning services that put passengers in touch with unregistered drivers.

French taxi drivers' demonstration against Uber turning ugly in Paris. And they wonder why nobody is taking cabs in France

Despite this court ruling, the company's luxury Uber service is still legal with officials estimating that France's taxi drivers had lost between 30 and 40 percent of their revenue over the past two years as a result of the mobile app's growth.

The protests have led French ministry officials to call for a greater crackdown on those offering Uber services for fear of more chaotic scenes on the country's roads.