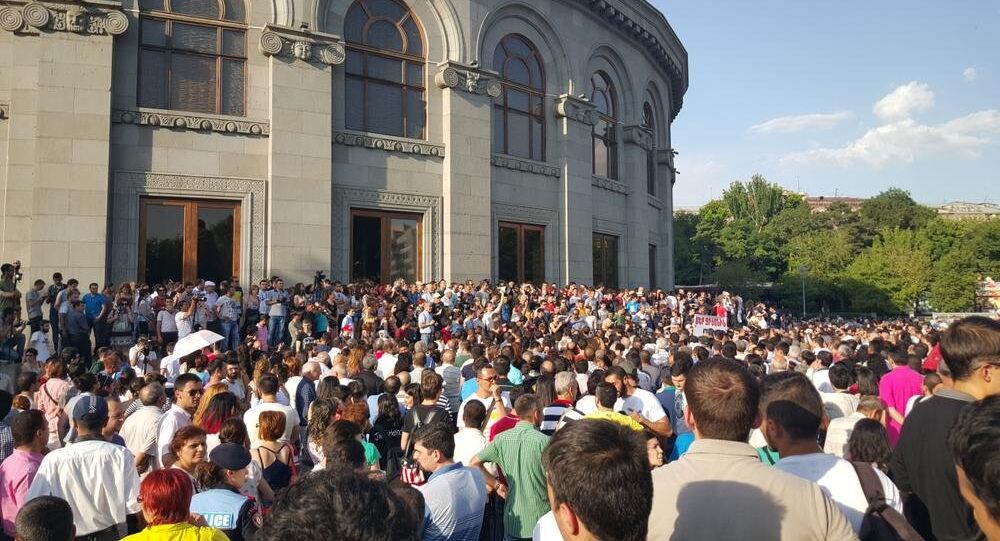 While the ongoing protests in the Armenian capital Yerevan are peaceful, police will not use violence against demonstrators, Deputy Chief of Police Hunan Poghosyan said.

YEREVAN (Sputnik) — Mass protests against the rise in household electricity prices erupted in Armenia’s capital of Yerevan on Friday, and on Monday and Tuesday thousands of protesters attempted to march to the presidential residence.

According to the official, protesters stayed calm and behaved overnight.

"The police may at any time start [breaking up] the demonstrations, but while the rally is peaceful, we will not use force."

However, he warned that the organizers might exacerbate the situation, since on Wednesday there were more aggressive-minded people on the streets demanding to cancel the June 17 decision of the Public Services Regulatory Commission to raise the electricity tariff by over 16 percent.

Facebook / gazeta.ru
'Electric Yerevan' is Sliding Out of Control
On Tuesday morning, police dispersed the crowd using water cannons. Almost 240 people, including journalists, were brought to police stations, and 25 have sought medical assistance.

According to city officials, all those detained were subsequently freed.

Earlier in the day, member of the Russian Federation Council's International Affairs Committee Igor Morozov asserted that the protests in Armenia are identical to the early stages of the coup in Ukraine and may be orchestrated from abroad.