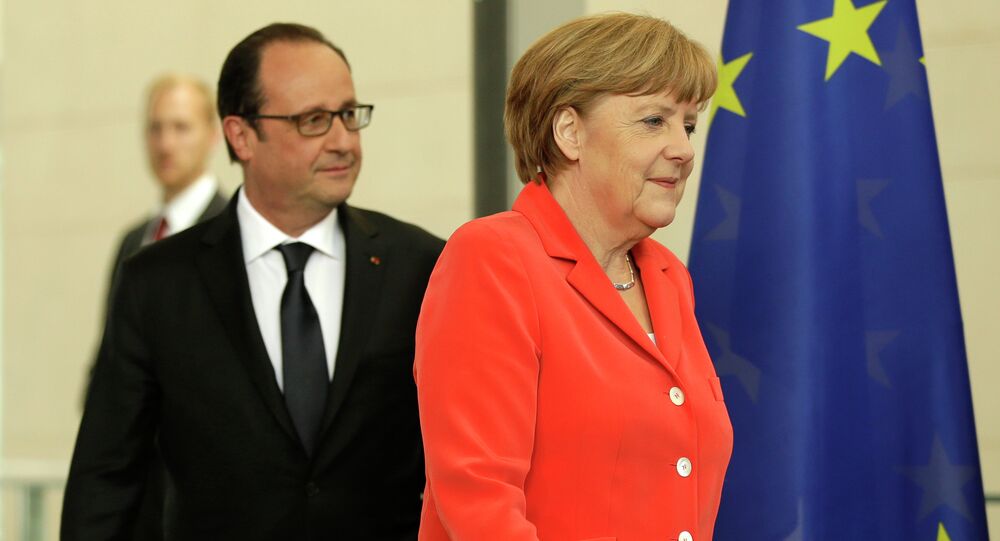 © AP Photo / Carolyn Kaster
WikiLeaks Release: NSA Spied on Three French Presidents
German Chancellor Angela Merkel's efforts on the situation in Greece were labeled by French President Francois Hollande as nothing but a show, according to the German newspaper Bild, which cited the latest WikiLeaks disclosures.

The Bild said that Hollande was rather downbeat about Merkel's efforts to help overcome the Greek crisis; it was something that prompted him to organize in 2012 a secret meeting with Germany's Vice Chancellor and Minister for Economic Affairs and Energy Sigmar Gabriel, who is also chairman of the Social Democratic Party of Germany.

Merkel was reportedly not notified of this meeting in order to avoid "diplomatic challenges," Bild reported.

It quoted documents published by WikiLeaks as saying that on May 15, 2012, the day he assumed office, Hollande decided that Chancellor Merkel is allegedly going to "abandon" Greece and "will no longer move" in the direction of Athens.

The French president was "very much concerned," fearing that the Greeks may vote for an "extremist party" during the elections.

© AP Photo / Ebrahim Noroozi
WikiLeaks Reveals Saudi Arabia’s Efforts to Stir Political Unrest in Iran
Hollande was dismissive of Merkel after meeting her, calling her appearance a "pure show," as both sides made no breakthroughs during the gathering.

On Tuesday, WikiLeaks began publishing documents revealing that the NSA had intercepted the communications of Hollande and his predecessors Nicolas Sarkozy and Jacques Chirac, as well as other top French officials, for six years.

The leaked files include conversations between French officials about an array of pressing issues, including the international financial crisis, Greece's debt and the future of the European Union.