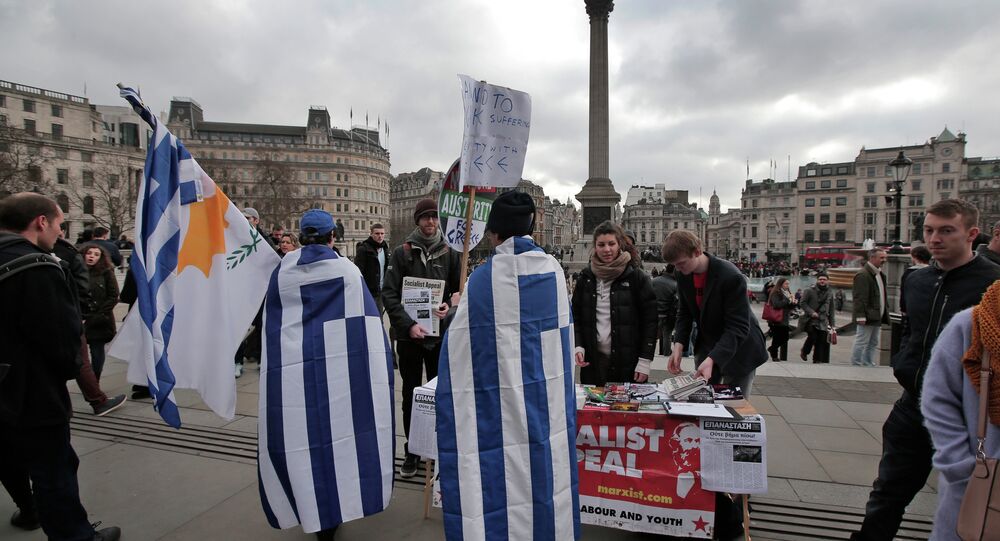 A campaign supporting Greece started in central London, as demonstrators convene on the Trafalgar Square to call for cancellation of Athens' debt as bailout talks enter the final stage.

© Flickr / Ion Androutsopoulos
EU Official Confident That Debt-Laden Greece Will Reach Deal With Creditors
MOSCOW (Sputnik) – Greece has been struggling to negotiate the terms of the next bailout package with the international creditors before the current deal expires on June 30. They are due to meet again in Brussels on Thursday to discuss a final agreement on the Greek debt crisis settlement.

In the petition posted on the WarOnWant website, the protesters on behalf of all Europeans demand to put an end to the austerity policies "that are causing injustice and poverty" in Europe and globally and work out UN rules to deal with government debt crises "promptly, fairly and with respect for human rights."

Member of the Green Party Molly Scott Cato is expected to deliver a speech before the demonstrators.

"If the EU challenges the democratic will of the people in order to allow the greed for wealth and power of financiers and corporations to prevail this represents a serious threat to the very principle of democracy,” Cato said in a statement.

Greece's overall national debt stands at about $350 billion, the largest part of which is owed to the European Commission, European Central Bank and the International Monetary Fund.