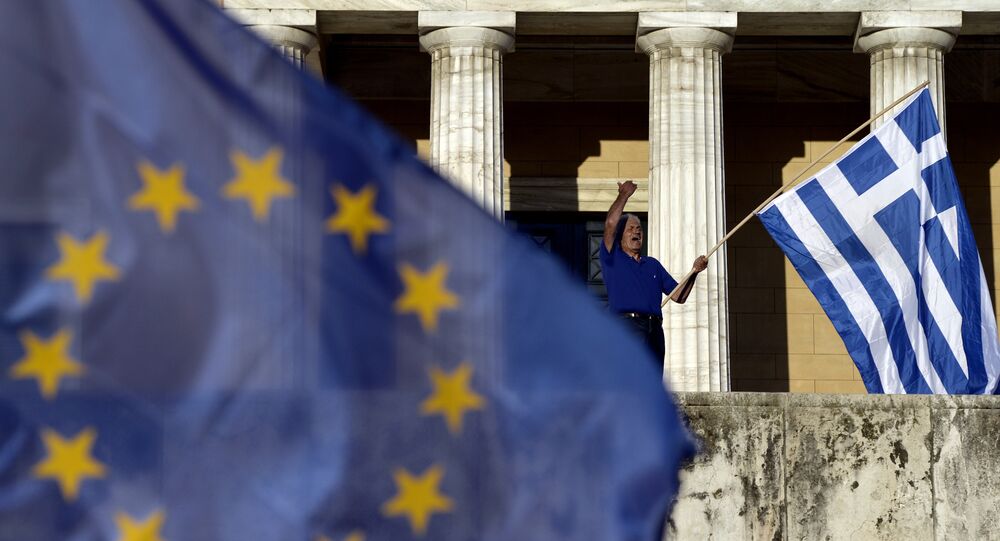 Greece, the birthplace of civilization is divided over its deal with Europe. The European Central Bank has approved more emergency bailout money for Greek banks in return for a rise in taxes and pension and health contributions.

The European Commission has promised an extra $39 billion (€35 bn) of funding if a Greek deal is reached by Wednesday. However, members of Alexis Tsipras' Syriza party have warned the Greek Prime Minister against betraying the Greek people by reaching bailout compromises with Brussels.

Meanwhile, EU leaders continue to push for a deal to prevent the country from exiting the European Union. And a deal appears to be on the cards — but at what cost?

In what's become a Greek ritual, thousands of people gather each night in Syntagma Square in Athens. Rival groups meet outside the Greek parliament. One side are demanding an end to austerity and more bailout deals with Europe. Another side are calling for continued membership with the European Union.

© AP Photo
Pro-Euro demonstrators hold up a giant Greek flag outside the Greek Parliament during a rally in Athens, Monday, June 22, 2015.

Rumour has #Greece proposing increase in pension contributions, only has the highest ones in OECD. Insanity goes on pic.twitter.com/BMMbUK6WvZ

Feeling betrayed, pensioners from around Greece have announced that they will protest this evening on the streets of Athens against the Syriza government's proposed austerity package.

Eurozone leaders welcomed the new budget proposals from Athens, so that negotiations can continue to avoid Greece defaulting on its $1.78 billion (€1.6 bn) debt to the International Monetary Fund (IMF).

Deputy parliament speaker and Syriza lawmaker Alexis Mitropoulos told Greek Mega TV: "I believe that this program as we see it…is difficult to pass by us.

"The Prime Minister first has to inform our people on why we failed in the negotiation and ended up with this result. I believe the measures are not in line with the principles of the left. This social carnage… they cannot accept it."

A deal may appear to be on the cards but the drama is far from over.

Greece's creditors could demand more austerity measures from Tsipras in order to finalize the agreement when representatives from the Troika, the European Commission, the European Central Bank and the International Monetary Fund meet on Wednesday night.

If the Greek government don't support the deal, Alexis Tsipras might be left with no other choice but to call a snap election or referendum, leaving the Greek people to decide the country's fate.