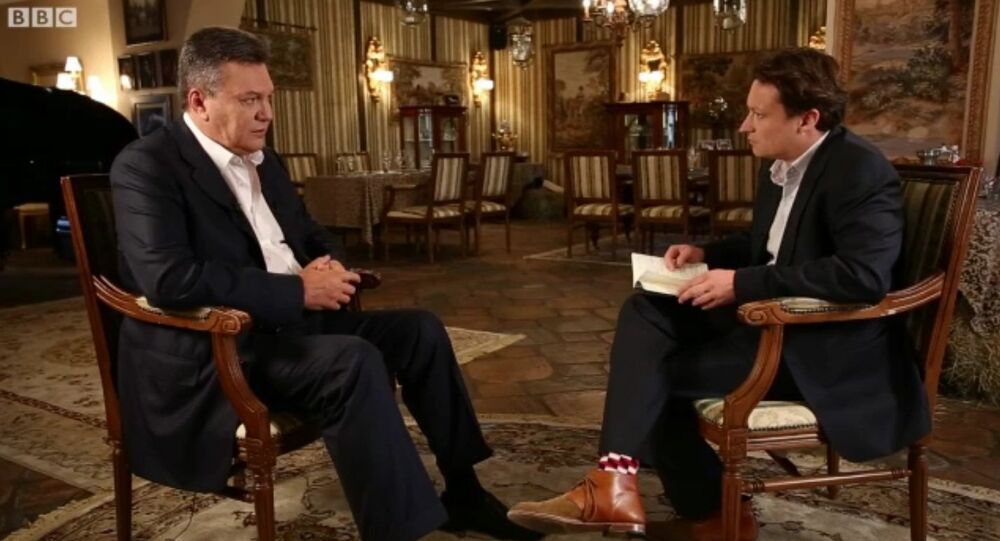 The ВВС were the first Western media to interview ex-Ukrainian president Yanukovych since his overthrow in February 2014, however they inexplicably left out the most vital answers in their English translation. While keeping the parts about the ostriches, it deems to be important, it left out the key answers about Crimea and genocide in Donbass.

Here is what its English speaking readers and viewers will never learn from the story on its English language website.

BBC
'Crimea is Lost for Ukraine. It is a Fact' - Yanukovych to Western Media
Out of over eight minutes of conversation between the former president and the interviewer about Crimea, the editors cut the responses down to several sentences, concluding with a dry “Crimea is a tragedy for the Ukrainian state.”

Here is what the former leader had to say on the issue, according to the full version of the interview posted on the BBC's own Russian language website.

Viktor Yanukovych said that he was in Crimea when he decided to leave the country. At that time he was already ousted and faced two options whether to start bringing together those loyal to him and begin a war or leave the country.

While that was a very hard decision, he opted to leave the country.

“If I hadn’t done it then, quite likely we would have had in Crimea something very similar to what we now have in Donbass,” he said. “Probably, in some other regions as well; we would have had a full scale civil war.”

“What is better for the population of Crimea? War or Peace?” he questioned.

“In any country, in any part of the world population would choose peace. That is why when Crimea was holding a referendum, people were scared for their future, for the future of their children. And Crimea did not want to take up the rightwing radical ideology Maidan was bringing onto them.”

© RIA Novosti . Grigory Vasilenko
Ukrainian Politician Fears Ex-President Yanukovych to Assume Office Again
“Maidan scared Crimea and Donbass and the southeast of Ukraine with their rightwing radical outlook. That was the main issue which forced the population of Crimea to build up the units of self-defense and defend themselves. And the Supreme Council of the republic made a decision to hold a referendum.”

“90 percent of the population voted for the exit [from Ukraine].”

© Sputnik / Sergey Pivovarov
Confusing U(kraine)-Turn: Yanukovych Ousting Was Illegitimate - Poroshenko
Asked about what he thinks is going on in his native region of Donbass, the ex-president said that it pains him to watch the unfolding events, and can do so only in short bursts. However infrequently he watches what is being shown on the situation in the region, his heart always sores as he is always looking at the familiar faces, familiar homes and familiar cities.

“Here are the graves of my ancestors, my parents, my relatives, my close ones, my friends,” he said, “It is a terrible tragedy.”

“What is going on now in Donbass is a genocide. Genocide of the population of Donbass. And it is being committed by those who brought in tanks and guns to shoot at the peaceful civilians,” he said.

“Even during the truce over 500 civilians have died. That is the disaster.”

Like any other ordinary man, the ex-president wants to return to his motherland. And sincerely does not understand why he had been deprived of the one.