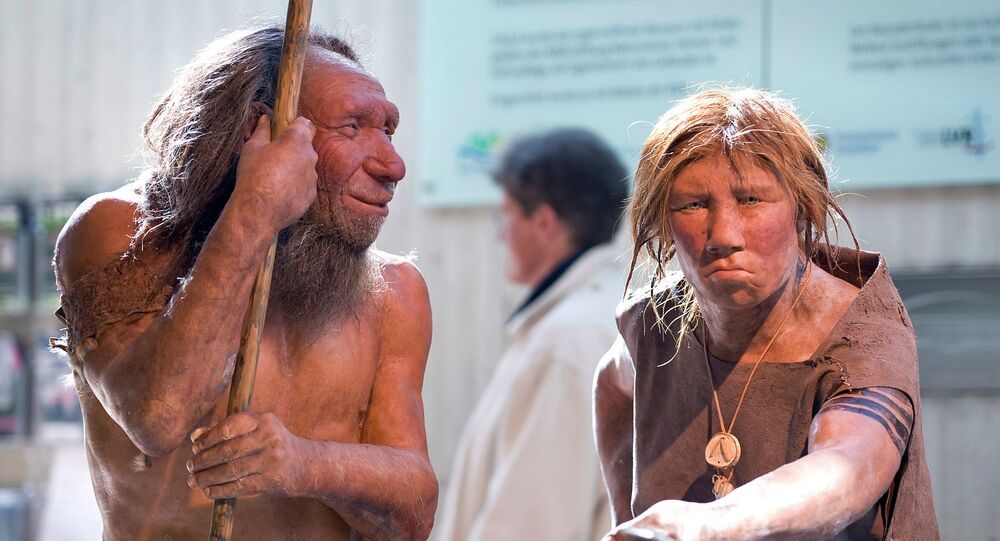 A study of the DNA of a man who lived 40,000 years ago in present-day Romania found he had a Neanderthal relative as few as four generations back, the most Neanderthal ancestry ever seen in a modern human.

© Sputnik / Vladimir Vyatkin
Origin of a Virus: First Ebola Epidemic May Have Happened in Ancient Greece
Genetic analysis of a 37,000 to 42,000-year-old jawbone found in Romania has revealed the highest concentration of Neanderthal DNA so far discovered in an ancestor of modern humans, indicating that the individual had a Neanderthal relative dating back only four to six generations.
© Flickr / Tambako The Jaguar
Russian Taimyr Wolf Is Man's Most Ancient Best Friend, Study Shows
The findings, published in the journal Nature on Monday, show that the individual's close relatives interbred with Neanderthals in Europe; previously, it was thought that interbreeding between Neanderthals and humans had only occurred earlier, around 50,000 – 60,000 years ago, when the two species mixed in the Middle East when humans were first leaving Africa.

"The data from the jawbone imply that humans mixed with Neanderthals not just in the Middle East but in Europe as well," said Qiaomei Fu of the Max Planck Institute, one of the lead researchers in the study.

Genetic sequencing of the jawbone shows that six to nine percent of the man's genome came from Neanderthals, more than any other human sequenced to date, and the only case of interbreeding between humans and Neanderthals in Europe so far known to science.

The researchers hope the finding will shed light on the process of the disappearance of Neanderthals, which is estimated to have occurred between 45,000 and 35,000 years ago, when humans spread across Europe.

"We hope that DNA from other human fossils that predate the extinction of Neanderthals will help reconstruct the interactions between Neanderthals and modern humans in even more detail," said Mateja Hajdinjak, another researcher who worked on the study.

© REUTERS / MPI f. Evolutionary Anthropology/Paabo
A jawbone unearthed in Romania of a man who lived about 40,000 years ago is shown in this handout photo provided by Max Planck Institute for Evolutionary Anthropology in Leipzig, Germany June 21, 2015
The individual, named Oase 1, "does not seem to have any direct descendants in Europe today," said David Reich from Harvard Medical School, who also worked on the study.

"It may be that he was part of an early migration of modern humans to Europe that interacted closely with Neanderthals but eventually became extinct."

The human remains used for the study was found in 2002 in the Peștera cu Oase site in southwestern Romania, but advances in DNA testing have only recently allowed scientists to analyze the jawbone completely. Earlier analyses have shown that the morphology of the jawbone "is generally modern but some aspects are consistent with Neanderthal ancestry."

According to genetic comparisons of modern humans and Neanderthals, the latter, who were present since before 300,000 years ago, contributed around one to three percent of the DNA of modern people living in Eurasia today.