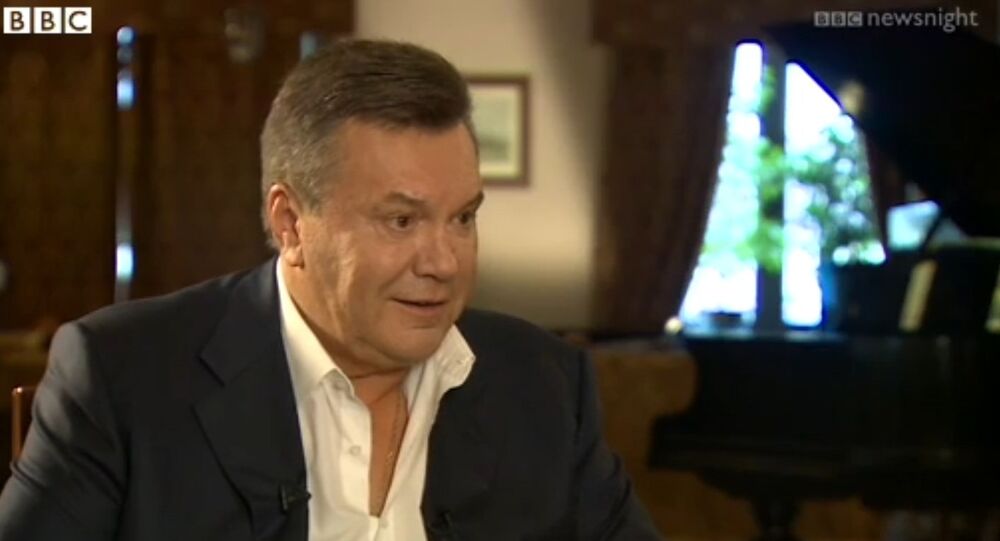 In his first Western media interview since his overthrow in February 2014 and the instigation of the military conflict in his country, ex-Ukrainian president Viktor Yanukovych admitted that the loss of Crimea was a "fact which had already happened" and thanked President Putin for rescuing his life.

© Sputnik / Vitaliy Belousov
What if Ukraine's Euromaidan Had Never Happened?
“Of course it [the Crimea] is a tragedy for the Ukrainian state,” ousted Ukrainian President Viktor Yanukovych told BBC Newsnight in what appears to be his first interview with the Western media since his overthrow last February.

“What has happened, has already happened. Today what happened is already a fact,” he added.

“There is war. Today [they're] talking about getting Crimea back. How? Through war? We need another war?” the former leader asked, sitting in exile in a horse riding club on the outskirts of Moscow.

Yanukovych, however, thanked President Vladimir Putin for rescuing his life by evacuating him from Ukraine during the night of February 23, 2014.

"The fact that Vladimir Putin took that decision, on the recommendation of his own special forces, that was his right and his business. He did not consult me,” the politician said.

"I am, of course, grateful to him for giving the order and helping my security to get me out, and save my life," he added.

The former president denied allegations of embezzling state funds or of hiding millions of dollars in foreign bank accounts, explaining that there was a 630 square meter house on the territory of the residence, which belonged to him personally, which he bought with his own money and declared. Everything else on that territory, including the notoriously famous zoo with ostriches, did not belong to him personally and never did.

The ex-president also reminded that he had warned that those who instigated the uprising at Maidan Square, would not stop at Maidan; that they would go further… and they did.

© REUTERS / Ruben Sprich
George Soros Believes 'New Ukraine' is a Model for European Union
The former politician admitted that he probably did not do enough to stop the conflict from unraveling, though he personally did not give any orders to fire at protesters. However, he did not deny his responsibility.

“I don’t have any information, any facts, that anyone gave any order to fire on protesters,” he said. “I was categorically against it.”

“I did not give any orders, that was not my authority,” Yanukovych added. “Secondly, I said publicly that I was against the use of force, let alone the use of firearms.”