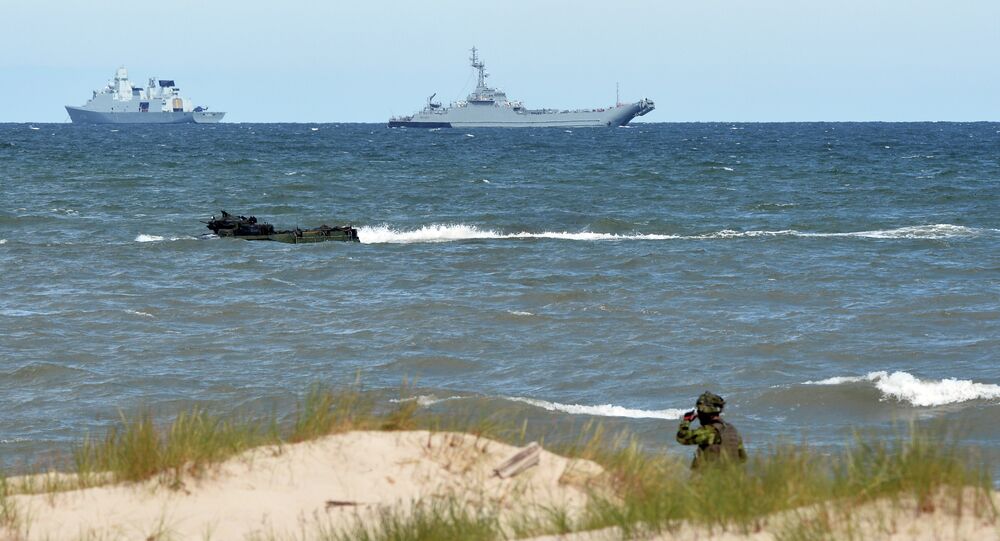 NATO Secretary General Jens Stoltenberg has said the alliance was increasing its pressure on Russia by massively boosting the deployment of troops and military assets in Eastern Europe and the Mediterranean.

In a huge show of strength, NATO — which has opened its doors to the former Warsaw Pact states of the Czech Republic, Hungary, Poland, Bulgaria, Estonia, Latvia, Lithuania, Romania, Slovakia, Slovenia, Albania, Croatia since 1999 — is continuing to build up its capabilities in the Baltic States, Eastern Europe and the Mediterranean.

"NATO is facing a new security environment, both caused by violence, turmoil, instability in the south — ISIL in Iraq, Syria, North Africa — but also caused by the behaviour of a more assertive Russia, which has used force to change borders, to annex Crimea and to destabilize eastern Ukraine," Stoltenberg told reporters.

© AP Photo /
US Deploys in Mediterranean as NATO Brings in 25,000 Troops

His comments came as allied forces took part in an amphibious assault on a beach near Ustka in northern Poland, as part of naval exercise BALTOPS. The mock attack, aimed at defeating enemy forces occupying the coast, was commanded by the British ship HMS Ocean and the American USS San Antonio.

"And therefore NATO has to respond. We are responding, and we are doing so by implementing the biggest reinforcement of our collective defenses since the end of the Cold War and the Spearhead force is a key element of this reinforcement, and it's great to see that it's functional, and that it's exercising here in Poland."

More than 15,000 troops from 22 nations are also taking part in operation Allied Shield, a series of exercises designed to test the strength and readiness of NATO and allied armed forces.

@FredNoble2 You have been brainwashed into believing that your NATO God of War can do no wrong, haven't you?

"This Alliance is Ready, Willing and Able"

Writing in the Wall Street Journal, Stoltenberg and Gen. Breedlove, the head of US European Command and NATO's supreme allied commander in Europe said: "We are in Poland this week to meet and see allied forces take part in Exercise Noble Jump, the first deployment of NATO's new Very High Readiness 'Spearhead Force'.

"Allied Shield will demonstrate that NATO is able to deploy combat forces anywhere within NATO's territory within days should a crisis break out or if allies are threatened," the NATO pair said.

"It will show the world that this alliance is ready, willing and able to deal with whatever challenges it faces."

"Moreover, the Spearhead Force is exactly that: the tip of the spear. Behind it lies the NATO Response Force, which allies have agreed to more than double in size over the coming months. It will consist of more than 30,000 soldiers, sailors, marines and aircrew, ready to reinforce allies or defend our security interests wherever needed," they said.

#West narrative: #NATO expansion eastward is peaceful not aggressive; #Russia defence measures is aggressive not peaceful. I love #US & #EU

Stoltenberg and Breedlove said NATO was also creating a network of small headquarters in Estonia, Latvia, Lithuania, Poland, Romania and Bulgaria to provide for the rapid deployment of NATO reinforcement forces in case of a threat, support collective defense planning, and assist in the coordination of multinational training and exercises.