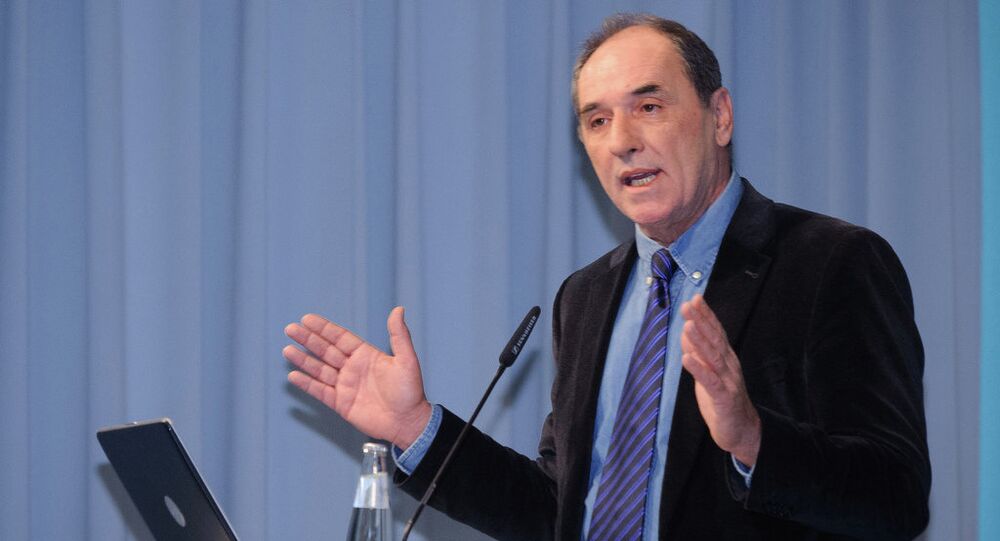 Greece’s Minister of Economy, Infrastructure, Shipping and Tourism Giorgos Stathakis said that the Greek government plans to keep the country in the eurozone.

© AP Photo / Yorgos Karahalis
Most Germans Want Greece Out of Eurozone - Poll
ST. PETERSBURG (Sputnik), Anna Liatsou – The Greek government plans to keep the country in the eurozone and put it back on the road to recovery, Greece’s Minister of Economy, Infrastructure, Shipping and Tourism Giorgos Stathakis told Sputnik Wednesday.

Athens is currently in talks with its trio of international creditors to reach a new bailout deal before the current program expires on June 30. In the latest round of talks in Brussels, held on Sunday, the parties failed to reach an agreement.

"We’ll keep Greece obviously within the euro, and we’ll allow the Greek economy to return to a growth pattern," Stathakis told Sputnik.

The Greek minister is among the government officials due to take part in the three-day St. Petersburg Economic Forum in Russia, which kicks off on Thursday.

© CC0
Divine Intervention Needed if Greek Deal Is to Be Reached
Stathakis reaffirmed the leftist government’s commitment to hammering out a framework agreement with their creditors from the International Monetary Fund (IMF) and the European Union.

"The government is committed to finding a solution with its European partners," he said, adding that Athens would stick to its social agenda.

Greece was hit particularly hard by the economic crisis of the late 2000s. The country was plunged into recession and becoming mired in multibillion-dollar debt to international creditors, triggering speculation that it might default or leave the eurozone. Creditors want the country to introduce spending cuts and reduce pensions in order to unlock the next bailout package.