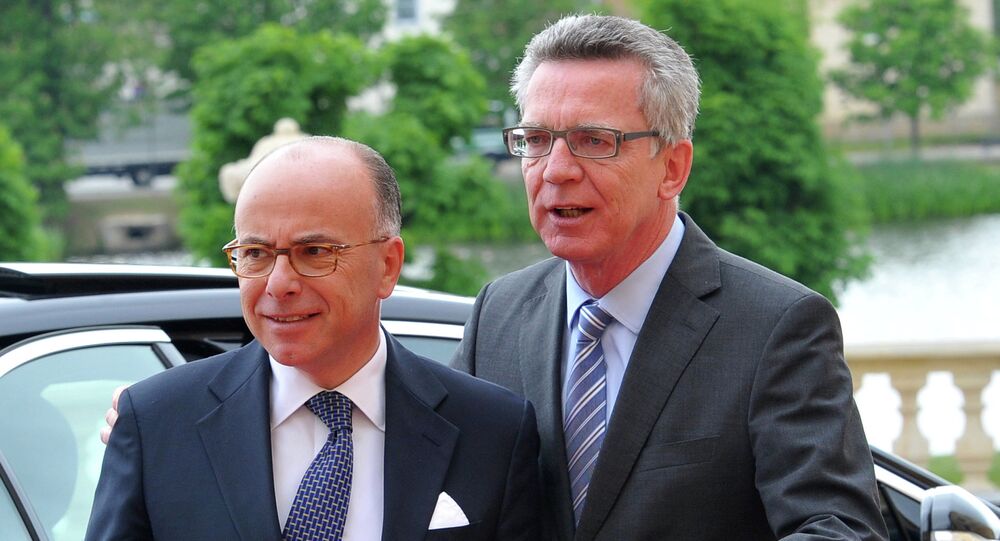 Germany and France are ready to get involved in distribution of irregular economic migrants across Europe, but this distribution should be limited, according to the joint statement of the German and French interior ministers.

© AFP 2021 / JEAN-CHRISTOPHE MAGNENET
Italy Threatens to Allow Undocumented Migrants to Travel in Europe
BRUSSELS (Sputnik) — The German and French interior ministers on Tuesday urged for EU solidarity in the migrant crisis but ruled out opening doors to what they referred to as irregular economic migrants, in a joint statement delivered in Luxembourg.

"Those who come to Europe for quite understandable but still economic reasons that have nothing to do with the right to seek asylum have to stay in Italy and Greece, the so-called hotspots, and be repatriated from there," German interior chief Thomas de Maiziere told reporters during a joint press conference with his French counterpart Bernard Cazeneuve.

EU interior ministers met in Luxembourg to address the migrant crisis after they came under pressure from Italy and Greece — two countries that have been forced to accommodate thousands of undocumented asylum seekers since early 2015. Due to their location on the Mediterranean Sea, they are often the first point of entry to the European Union, lying on popular migrant routes from North Africa.

Thomas de Maiziere said that Berlin was ready to stand by Rome and Athens and help them resettle genuine asylum seekers.

© AFP 2021 / Emmanuel Dunand
EU Commission Insists Member States Will Be Forced to Accept New Migrants
"We are ready for solidarity toward Italy and Greece. We are ready to offer them help – a great deal of help – with accepting and registering [migrants]. We are also ready to get involved in their distribution across Europe, but this distribution should be limited to those who have a chance of staying," de Maiziere said.

On Monday, Italian Prime Minister Matteo Renzi threatened to issue visas to thousands of undocumented asylum seekers, should Brussels fails to redistribute them equally across the European Union. The bloc plans to resettle some 60,000 migrants across the union to share responsibility for the migrants more equally among member states.