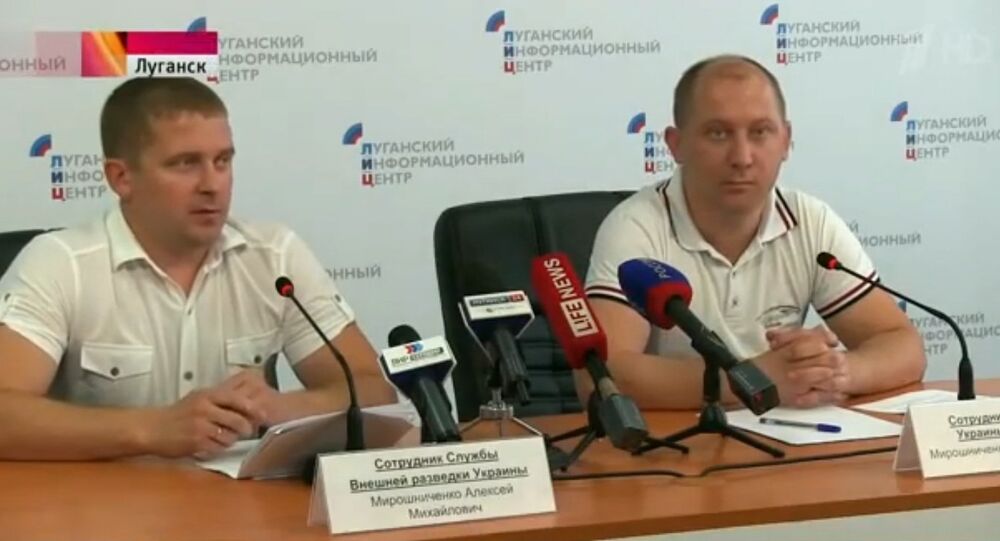 Two brothers claiming to have worked for the Ukrainian state apparatus, one of them for the foreign intelligence service, and the other for the Foreign Ministry, held a press conference in Lugansk on Monday after switching sides to fight for the fledgling Lugansk People's Republic, Russia's RIA Novosti reports.

© AP Photo / Evgeniy Maloletka
Donbass on Brink of Major War, Conflict May Escalate Any Time - DPR
Alexei Miroshnichenko and Yuri Miroshnichenko, the former stating that he had worked in the Foreign Intelligence Service and the latter that he had worked in Ukraine's embassy in France, declared their unwillingness to continue working for Kiev, saying that they could no longer tolerate what was happening to their country.

"We decided to return to our hometown," the brothers stated. "We made the decision voluntarily; we were not compelled to do so. We can no longer put up with what is happening in Ukraine. Traitors, fascists, various intelligence agents have taken up the reins of the country, and are leading it to ruin."

Alexei explained that for him, "the turning point was [finding out] that the people of Donetsk and Lugansk are being deliberately exterminated. They [Kiev authorities] do not pay attention to how many children will die. No one could have thought that such a thing could happen to our country. This is a clear policy of genocide against the people of Donbass. I consider this to be morally unacceptable, and I am not the only one."

The alleged former intelligence officer told reporters that the brothers did not transmit any intelligence-related data to LPR authorities.

Commenting on who is responsible for what they call genocide, the brothers noted that "the crimes against civilians are being committed mainly by representatives of the territorial battalions. This includes Aidar, Azov and Tornado. Innocent people are summarily shot, demeaned, and have their property taken from them. Women are raped en masse, including minors. There have been instances reported of conscripts who fled the battlefield being shot. Local branches of the 'Nova Poshta' [a Ukrainian delivery service] are crammed with property stolen from civilians."

© AFP 2021 / DIMITAR DILKOFF
OSCE Observers Register Over 140 Explosions Near Donetsk
Claiming to have witnessed some of the carnage with his own eyes, Alexei commented on the battalions' anarchic, completely unregulated behavior, noting that he personally had to avoid being hit by Aidar battalion vehicles three times, and on one occasion was forced into a game of chicken with one of their jeeps.

The believed former intelligence officer added that under foreign guidance, the Ukrainian Foreign Intelligence Service has worked to "develop all sorts of reports for media consumption aimed at compromising Russia, blaming the tragedy that occurred in Ukraine on the Russian Federation. There was only one theme –that Russia is to blame for everything. The whole service was devoted to working in this direction –toward compromising the Russian side. We did not have any real hard data, but worked to ensure that in the informational sphere, Russia was displayed as the culprit."

The brothers warned that the Ukrainian Armed Forces is presently consolidating their positions, preparing for an offensive, and deliberately provoking Lugansk and Donetsk militia to return fire, in order to blame them for violating the truce.

The brothers also alleged that the Ukrainian army is being supported by mercenaries from Europe and elsewhere. "Most frequently I met people from Poland, Lithuania and Romania; they are fighting on the Ukrainian side for the money; very few of them came here with some ideas in their heads," Alexei noted.

© Sputnik / Evgeny Kotenko
Kiev Politician Proposes Depriving Citizenship to Russia Sympathizers
The brothers also revealed that the Ukrainian Armed Forces leadership has deliberately understated its losses over the past year of fighting with Donbass militia, stating that in the Ilovaisk pincer, where the army claimed publically to have lost over 100 personnel, the actual figures were at least 2,600, and that at Debaltseve, the true losses were between 6,000-7,000 killed, and not the 210-260 killed or missing claimed by the Ukrainian Defense Ministry.

Ukraine has yet to confirm or deny whether the Miroshnichenko brothers have served for the Ukrainian state apparatus.

Donbass on Brink of Major War, Conflict May Escalate Any Time - DPR