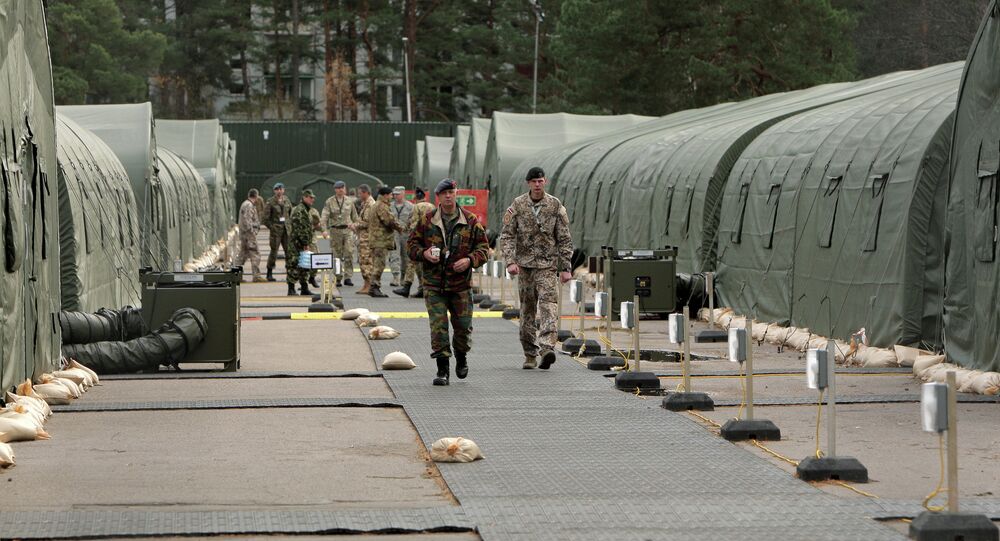 Two Russian citizens arrested in Latvia last week have been charged with espionage and conspiracy to commit terrorism after engaging in a protest action which involved entering a NATO base and hoisting a stylized Ribbon of St. George flag.

Last Wednesday, at around noon, Popko and Kurkin climbed a fence to the base using a ladder, taking down an American flag and unfurling a flag-sized Ribbon of St. George, before walking through the base's parade ground to the headquarters building, where they were detained holding more flags and leaflets. A third Russian citizen taking part in the protest is believed to have escaped Latvian security officials and left the country, Latvia's TV3 reported over the weekend.

The protesters described their demonstration as a "peaceful attack" on the base, which is presently being used in the large-scale Saber Strike 2015 NATO exercises, involving 2,500 NATO personnel in Latvia and 3,500 more in neighboring Estonia and Lithuania.

© Photo : https://www.facebook.com/beness.aijo
Riga Threatens Black Lenin With 10 Years in Prison for Fighting in Donbass
The protesters demanded "that American soldiers leave the Baltic states, and better yet – all of Europe. Yankee Go Home!" They noted their concern over the fact that "despite all existing agreements, the United States and its NATO allies have been steadily increasing their military presence on the Russian border," adding that they considered new permanent NATO bases in the region and US missiles in Europe "to be a direct threat to our country."

Latvian officials have accused the protesters of being connected to the Russian security services, or to the Russian military. Minister of Defense Raymond Vejonis stated that the incident was part of an "information war" and an attempt to discredit Latvia and its armed forces. Internal Affairs Minister Richard Kozlovskis called the action a "provocation."

If convicted, Popko and Kurkin could face life imprisonment.

'The Other Russia' is a non-conventional radical socialist and nationalist party founded by former dissident and writer Eduard Limonov.