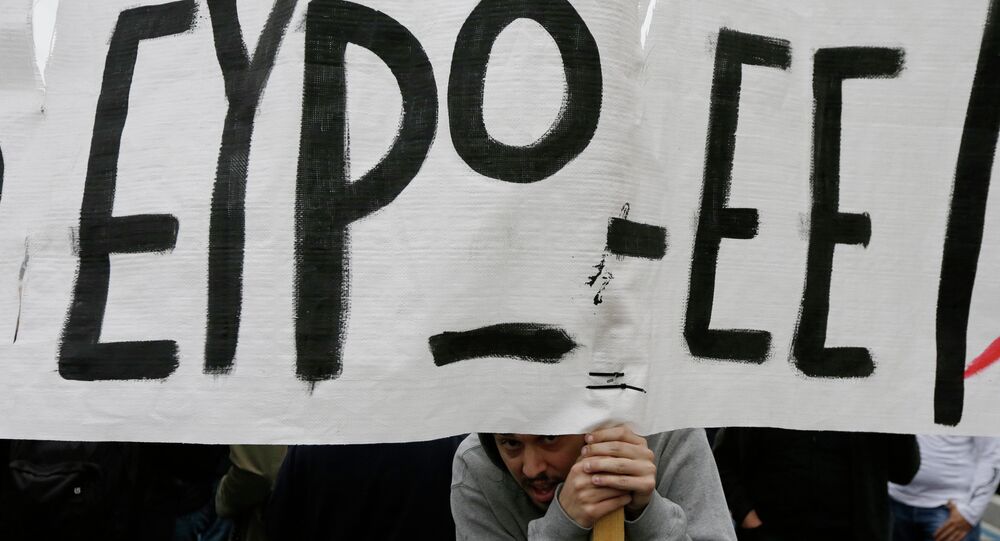 Grexit to Cost the World One Trillion Euros in Losses

Greek Finance Minister Yanis Varoufakis has estimated that Grexit would cause the international economy a trillion euros in losses, besides, there will be a considerable political damage as “the investors, stockholders and citizens will see that the Eurozone is not an indivisible unity,” Greek newspaper Real News reports on Sunday.

“The investors, stockholders and citizens will constantly think that the Eurozone is not an indivisible unity,” Greek newspaper Real News quotes Greek Finance Minister Yanis Varoufakis as saying on Sunday.

The finance minister also estimated that the so-called Grexit would cause the international economy a trillion euros in losses despite the above political damage.

© Flickr / Theophilos Papadopoulos
Greece Will Not Sign Unachievable Plan With Creditors – Finance Minister
Varoufakis was firm in rejecting the possibility of the extension of the latest aid program to Greece and called for a new agreement between Athens and its international lenders.

Varoufakis offered to solve the Greek debt crisis via a 30-year loan with a relatively low interest margin from the European Stability Mechanism (ESM), the purchase of bonds at the disposal of the European Central Bank (ECB) and their immediate withdrawal.

Greece was among the countries which were hard-hit by the aftereffects of the 2008 world economic crisis. The financial hardship resulted in a multibillion debt by accepting large loans offered by the three lenders, the European Commission, the ECB and the International Monetary Fund (IMF).

Greece's total debt is currently estimated at $350 billion, with some $270 billion owed to the international lenders.