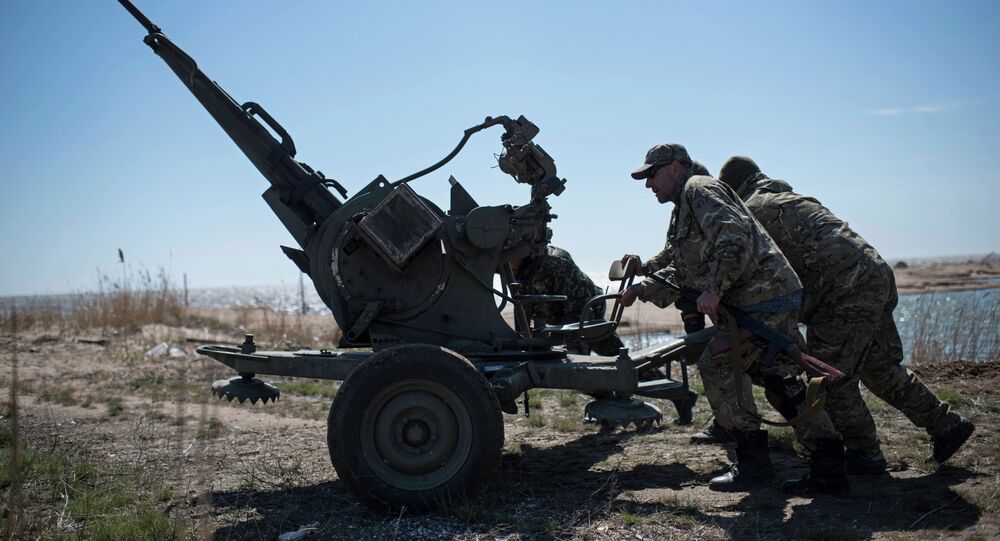 Donbass on Brink of Major War, Conflict May Escalate Any Time - DPR

The conflict in southeastern Ukraine can escalate at any time, representative of the self-proclaimed Donetsk People’s Republic (DPR) at the Minsk peace talks Denis Pushilin said Sunday, pointing to a threat of a major war between Kiev forces and independence supporters amid a ceasefire enforced in the region.

DONETSK (Sputnik) – Kiev forces launched a military operation against independence supporters in the Donetsk and Lugansk regions in April 2014. In February the two sides signed a ceasefire deal, but sporadic fighting has continued in Donbass despite the agreement.

"We are actually on the brink of a major war right now. Our conflict is not an internal Ukrainian one, it is fully in line with what is happening in Syria, Yemen, the uprising in Macedonia,… and could lead to very tragic consequences and, as a result, things can escalate in a matter of hours."

Pushilin told RIA Novosti that the stance of the international community on the Donbass conflict could determine whether fighting in Ukraine’s southeast would finally stop.

"Some major developing countries are giving a certain signal even through their neutrality and non-interference [in the conflict], that they are not supporting a military solution, they are for the continuation of the peace process. A singe decision that seemingly has no influence on anything could become critical and tip the scales one way or another."

© AP Photo / Efrem Lukatsky
Caught Red Handed: Leaked Satellite Images Reveal Kiev Violated Ceasefire Multiple Times With Washington's Approval
The West and Kiev have been accusing Russia of fueling the conflict in Ukraine’s southeast, although the claims have not been supported with any factual evidence. Moscow has repeatedly stressed that it is not involved in the conflict and has participated in various formats of Ukraine peace talks.

Kiev has nonetheless continued to ask Western governments, particularly the United States for military assistance amid sporadic fighting in Ukraine’s southeast. US President Barack Obama has not approved lethal aid to Kiev, although Congress has been pressing Washington to allow lethal weaponry supplies to Ukraine’s government.

"The incompetent political and economic structure of the country is evident. Here war is a kind of cover for a lack of professionalism, a lack of autonomy in decision making."

© REUTERS / Gleb Garanich
Majority of Ukrainians Ready to Exchange Donbass for Peace
Pushilin added that the conflict in Donbass could go on for dozens of years.

"It is not that we will be under fire for 10 years. What’s meant here is whether a full solution on political issues will be found in the conflict. This can take a very long time. This process is unpredictable," Pushilin explained.

According to Pushilin, the DPR is doing everything to bring an end to shelling in southeastern Ukraine.

"What is most important for us now is the issue of the ‘all-for-all’ [prisoner] exchange and the presence of some representatives from the other side who do not consider it necessary to intensify the prisoner exchange process in the agreed ‘all-for-all’ format, they are trying to find some other ways and are slowing down [the process] with their actions," Denis Pushilin told RIA Novosti.

© REUTERS / Oleksandr Klymenko
Germany, France Responsible for Minsk Peace Process in Ukraine – Merkel
The DPR negotiator stressed that the prisoner swaps was the main issue of discussion among members of the humanitarian subgroup of the Contact Group on Ukraine, which includes representatives from Kiev, the self-proclaimed people’s republics of Donetsk and Lugansk, Moscow and the Organization for Security and Co-operation in Europe (OSCE).

A series of subgroup meetings have been held since early 2015 to make sure that both Kiev and DPR and LPR are moving forward in implementing the Minsk peace agreement, reached in February.

Lifting of Donbass Economic Blockade to Be Discussed in Minsk

© Sputnik / Taras Litvinenko
Kiev to Enforce Complete Blockade Over 'Cancerous Tumor' of Donbass - MP
The lifting of the economic blockade imposed on Donbass by Ukrainian President Petro Poroshenko amid fighting between Kiev forces and local independence supporters will top the agenda at the upcoming talks in Minsk, the DPR envoy said.

"The lifting of the economic blockade," Pushilin said when asked about the key issues to be discussed during the talks.

An economic subgroup of the Contact Group on Ukraine is scheduled to meet in the Belarusian capital on June 23.