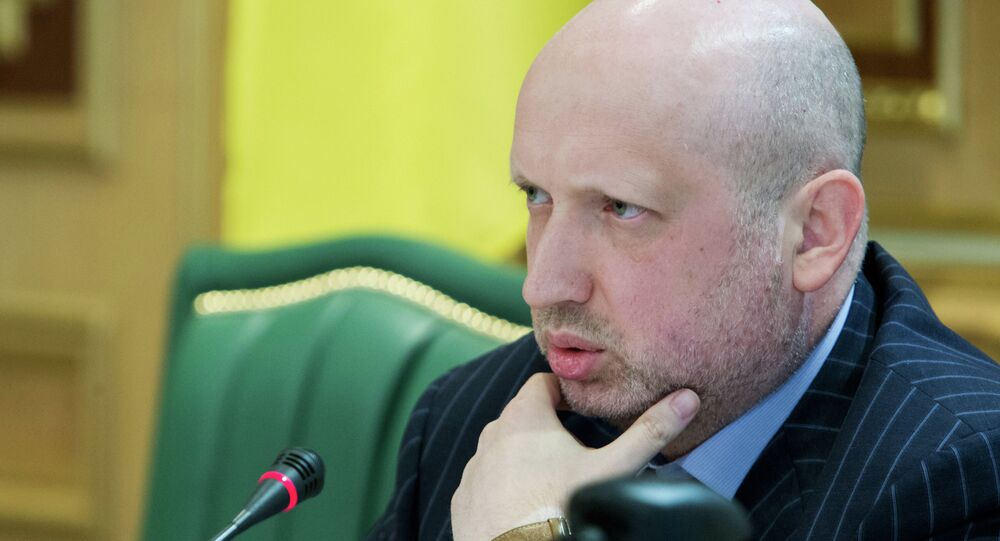 It is high time for Europeans to dig out bomb shelters, as some phantom Russian nukes in Crimea are targeting NATO member states in the Old World, "the most peaceful" senior Ukrainian politician hinted.

© AFP 2020 / WOJTEK RADWANSKI
US Considers Military Response to Russia's Alleged INF Violation
In an interview with local TV Channel 5, the Ukrainian Security Council Secretary accused Russia of kicking off a nuclear arms race and wishing to shift the power balance in the world.

"Today, Russia is beginning a nuclear arms race and is deploying attack nuclear weapons to the frontline," Oleksandr Turchynov said referring to the alleged militarization of Crimea.

He feared that Russia might place operational-tactical nuclear weapons at the peninsula, naming the Iskander-M missile complexes, Tu-22M3 bombers and nuclear-capable submarines as examples.

© Sputnik / Evgeny Kotenko
Brace Up! Russia to Invade Poland, Baltics, Germany etc - Kiev Politician
It is noteworthy that these allegations come amid the Ukrainian defense minister's fresh statement that Kiev had no evidence of any Russian nuclear weaponry in Crimea.

But the defense ministry's stance seems to have little significance for Turchynov. He went on, warning that those menacing phantom Russian nukes in Crimea might be aimed at the capitals of NATO members in Europe.

"One can't pacify an aggressor, the aggressor must be stopped, stopped harshly," he emphasized. The most ridiculous fact is that Mr. Turchynov conveniently forgot to mention that it was him [as an acting President of Ukraine] who endorsed the military aggression against Donbass independence supporters on April 14, 2014, and started the bloodshed.

© AFP 2020 / JANEK SKARZYNSKI
Nuclear Paranoia: Kiev May Deploy Missile Defense Systems Over 'Threats'
The Security Council Secretary added that he always asks the US and European leaders "not to turn a blind eye to this menace" and reiterated his initiative to cut Russia from SWIFT and seal off the Bosporus Strait in order to block the Russian fleet inside the Black Sea.

Speaking on the topic of "Russian aggression", he again forgot to mention that the Kiev authorities have been zealously turning the bleeding Ukraine into a firing range for NATO troops by scrapping the country's non-aligned status and inviting foreign military for drills.

As for Russia, Moscow has every right to potentially deploy its weapons in Crimea or wherever else on its territory, like any other country.

© AFP 2020 / TOBIAS SCHWARZ
Ukraine is 'Bulletproof Vest' of Europe - PM Yatsenyuk
Mr. Turchynov is apparently still under the deep impression of the "Crimea. Way Back Home" movie, aired in March, in which Vladimir Putin said that Russia had been ready to place its nuclear forces on alert if the situation during the Crimean referendum had deteriorated.

On May 20, Mr. Turchynov said Kiev might consider placing missile defense systems due to — guess what?— the "Russian nuclear threat".

His colleague Prime Minister Arseniy Yatsenyuk, well-known for his "profound" knowledge of history, said that Ukraine played the role of Europe's "bulletproof vest" before Russia, and said that Ukraine was on the brink of a nuclear war with its Eastern neighbor.