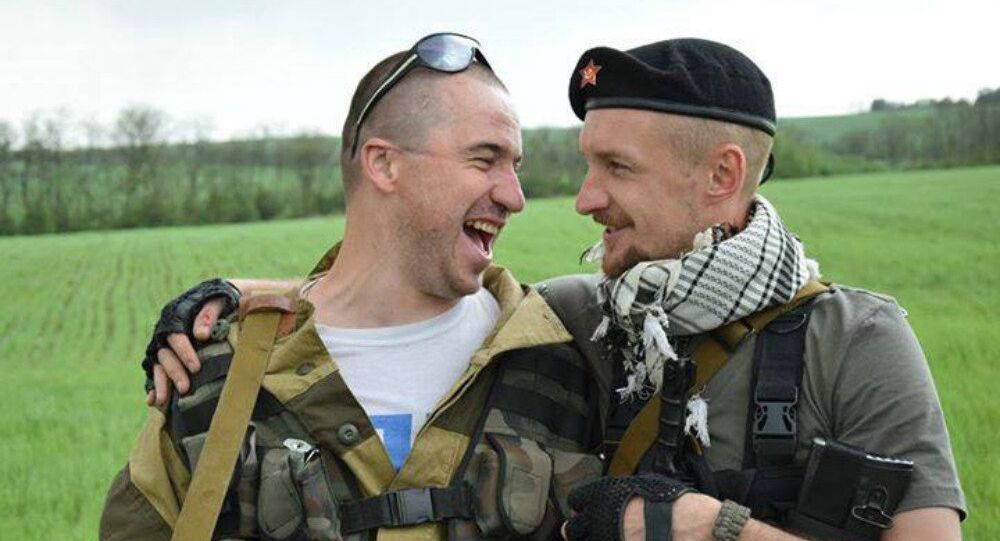 Czech and Slovak volunteers fighting in Donbass on the side of the self-proclaimed Donetsk People's Republic have announced the formation of a joint Czech-Slovak fighting unit, a statement on the Slovak Facebook page of the 'International Brigade 15' has announced.

The Facebook post noted that the Czech-Slovak squad, formed from the Pyatnashka 15 international brigade, already has eight members, and is looking for several more volunteers to create a 10 member squad, complete with its own badge and nomenclature. The page notes that prospective volunteers should have previous military experience, a working knowledge of Russian, be in good shape, and be under 40 years of age.

On Monday, Slovak news site Aktuality.sk published an interview with one of the new unit's volunteers, who spoke on condition of anonymity. According to the volunteer fighter, the eight-person squad consists of four Czechs and four Slovaks, among them the famous Slovak militia commander nicknamed 'Sojka' ('The Jay') who is on leave following an injury. The other volunteers include rank-and-file troops as well as several specialists.

New Unit Does Not Include All Czech, Slovak Volunteers Serving in Donbass

YouTube
Many French Citizens Fighting Alongside Donbas Militia – Health Volunteer
According to the fighter, there are Czechs and Slovaks serving in other units, but the new squad has no plans to incorporate them, given that "it is hard to leave the people you have gone through hell with." He noted that this new unit was established "to enable us to accept [new volunteers] who decide to come here from Slovakia and the Czech Republic, and to make their incorporation into military life smoother. Whether an 18-year-old idealist, a foreign legion veteran, or a reserve officer, we are trying to find a place for each of them which will allow their potential to be fully exploited."

The fighter explained that the unit's members have been present in Donbass since last summer, their two-company Pyatnashka unit serving under the DPR's Republican Guard, and participating in the Battle of Debaltseve between January and February 2015. Their operations included espionage and sabotage missions, and they served as a garrison force in the area until April. "During this period, we were exporting trophy ammunition from the place, repairing eliminated trophy machines, and so on," the volunteer noted. In May, the fighters were relocated to a position outside the town of Marinka, about 20 km west of Donetsk, where Ukrainian forces have recently been accused of launching a major offensive.

Asked by his interviewer whether the unit is engaged in fighting at the moment or enjoying a peaceful period, the fighter explained that "there has never been a peaceful period here and it will never come until an actual peace arrives. The exchange of fire and injuries occur on a daily basis." He clarified that his unit is considered a 'Sturm' group, "which means that we're usually sent to very hot zones, and places expected to get hot in the near future."

The volunteer explained that the new all-Czech and Slovak unit was formed out of the Pyatnashka 15, an international volunteer fighting group which initially consisted of 15 people. The group was formed in July 2014 and has since expanded.

Asked about the quality of the living conditions faced by his unit, the fighter noted that they are good, their present barracks having water, heating, and normal beds, and their soldier's wages averaging 8,000 Ukrainian hryvnia (equivalent to about $375 US) per month.

As for weapons, the fighter noted that they were "the same that the countries of the Warsaw Pact used to have. We are using trophy automatic rifles, sometimes taken from [captured] warehouses. Firearms include the Mosin Nagant [bolt-action rifle], anti-tank rifles dating back to the Second World War era, and the famous Ak-47 and Ak-74 Kalashnikov." He added that the militia also has access to PTUR anti-tank missiles and RPG-7 rocket propelled grenade launchers.

The fighter noted that the militia suffers from difficulties in obtaining weaponry. "All of our weapons are trophies. At some points, there were absurd situations in which a group of 20 people took up their positions and had to exchange weapons with the group that was being relieved."

No Need for Russian Military Involvement

Asked by his interviewer whether the rumors of the Russian army's participation in the conflict talked about in Western media were true, the fighter noted that "the Russian army doesn't need to be here. The number of volunteers is very high. Every day, the [local] admission committee accepts between five and twenty applicants who want to serve."

As for the presence of Russian army weaponry, referring back to the aforementioned small-arms supply problems, the fighter noted that "the tanks that we have are trophies, as are the BMPs [infantry fighting vehicles]. We suffer from a huge shortage of wheeled transport."

© Flickr / Dirk Vorderstraße
Scores of Germans Fight for Independence of East Ukraine
Commenting on the use of Russian military badges by volunteers, which some Slovak media accept as proof of a Russian military presence, the fighter explained: "A great deal of the 'proof' of the presence of Russian military units is deduced from photographs showing guys with Russian army badges. However, Russian badges, military labels and designations decorate many people here. Russia helps us morally and politically. It also sends humanitarian aid, which is badly needed."

© Sputnik / Elena Shesterina
Independent Voices: The Stories of Western Volunteers Fighting in Donbas
Asked to comment on what motivates Slovaks and Czechs to volunteer to join the Donetsk and Lugansk militia, the fighter noted that motivations vary, from the aim of defending the local population to the desire to follow in the footsteps of the Czechoslovak legions of the First World War, to a simple search for adventure. Still, what appears to unite the volunteers, in his view, is that they all "consider the European Union a dictatorship and NATO as an aggressive pact, with this being our chosen way to fight against them."

The Slovak fighter voiced his indignation when asked by his interviewer whether the volunteers could reconcile themselves with the idea that they were fighting for a country other than their own, noting "if we couldn't, we wouldn't be here," and adding, "And who fights for the interests of Slovakia? What are Slovakia's interests? Our country has not been a sovereign state for a very long time. In politics, we follow the dictates of Brussels; in economics, the dictates of an oligarchy. The citizen's interest simply isn't taken account of."

© Flickr / ResoluteSupportMedia
Italian Volunteers Fight in Donbass Alongside Militias
Asked to speculate on when the war might finally come to an end, the fighter noted: "We don't dare to guess the answer. The truth is that Ukraine as a state is beginning to disintegrate, and people no longer believe the propaganda, and begin to sympathize with us. Assorted anti-Maidans are examples of this, along with the support from locals sending us information about the location and strength of the [Ukrainian forces]. The fighting may end only upon the intervention of a third party, either NATO or Russia."

Both Czech and Slovak law bans military service in foreign armies, punishable by up to five years in jail, although lawyers in both countries have argued that the Donbass volunteers are not violating existing laws, given that the Donbass armed formations are not the armies of officially recognized states.

On Monday, the foreign ministries of both the Czech Republic and Slovakia commented on the local media's follow-up to the Aktuality.sk interview, saying that at the moment they had no verifiable information about the participation of their citizens in the conflict. A spokesman for the Slovak Foreign Ministry added that in the ministry's view, foreign volunteers serve to destabilize the situation and subsequently damage Slovakia's foreign policy interests.