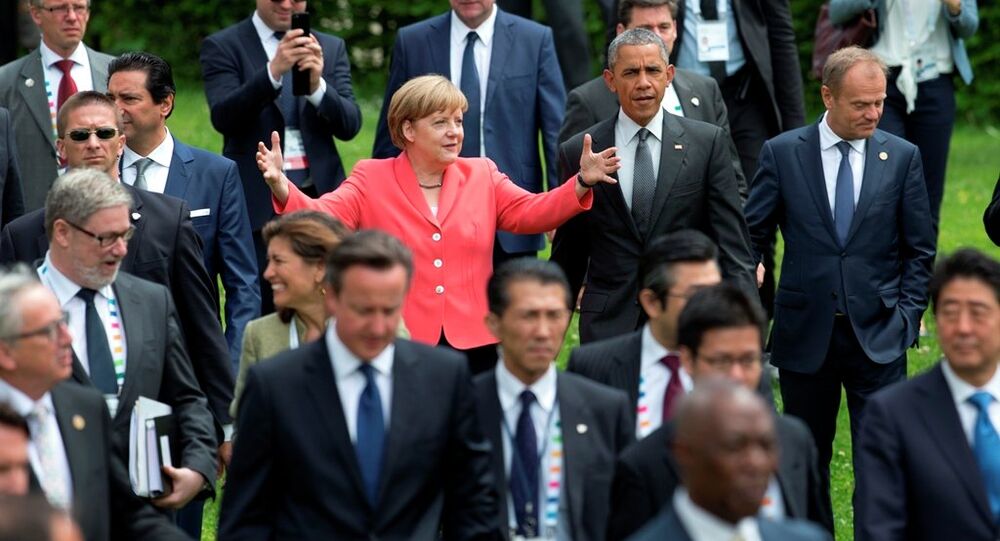 The G7 summit which has just taken place in Germany has become 'a talking shop' for western leaders seeking to enhance their global dominance, according to Marcus Papadopoulos, British political expert and editor-in-chief of Politics First magazine.

"The G7, ultimately, is a talking shop and a PR opportunity for the leaders of the western world to discuss amongst themselves how to enhance the West's global hegemony and to relay to their respective publics how the world is in 'safe hands' with the West in charge," Papadopoulos said.

At least when Russia was part of the #G8 it provided some sort of balance. Now the #G7 is US dominated talking shop. A joke! #G7Summit

"Ever since the end of the Cold War, the US has been trying to weaken and subdue Russia hence NATO's expansion eastwards," he said. "So when Russia was a member of the G8, its views were never genuinely respected — western leaders simply put on a facade. Russia's voice was officially listened to but was constantly side-lined when key decisions were taken by the US," Papadopoulos told Russian news agency TASS.

Papadopoulos said the G20 was "a more effective way to discuss the world's challenges because its membership is far more diverse than the G7 and is not confined to western countries."

"Further to that, Russia's opinion and concerns on numerous issues are heard and supported by countries such as the BRICS," he added.

"The West, led by the US and then Britain, cares little for what Russia thinks — they demonstrated that by advancing NATO to the western borders of the Russian Federation, by constructing a missile defense system in Europe which is aimed at the Russian strategic nuclear deterrent, by attacking and/or undermining Moscow's traditional allies — Yugoslavia and Syria — and by establishing a firm presence in Ukraine which constitutes a terrible threat to Russian national security."

The German media hailed the summit a huge success for Chancellor Angela Merkel. The socialist-leaning TAZ said the meeting was "spectacular," while Die Welt said it was a "complete and utter success." Critics, however, said most of the real work was done in side meetings, which bore no relation to the bland final statements released at the end of the meeting.

US Seeks to Pressure Russia While Europe Pays Price