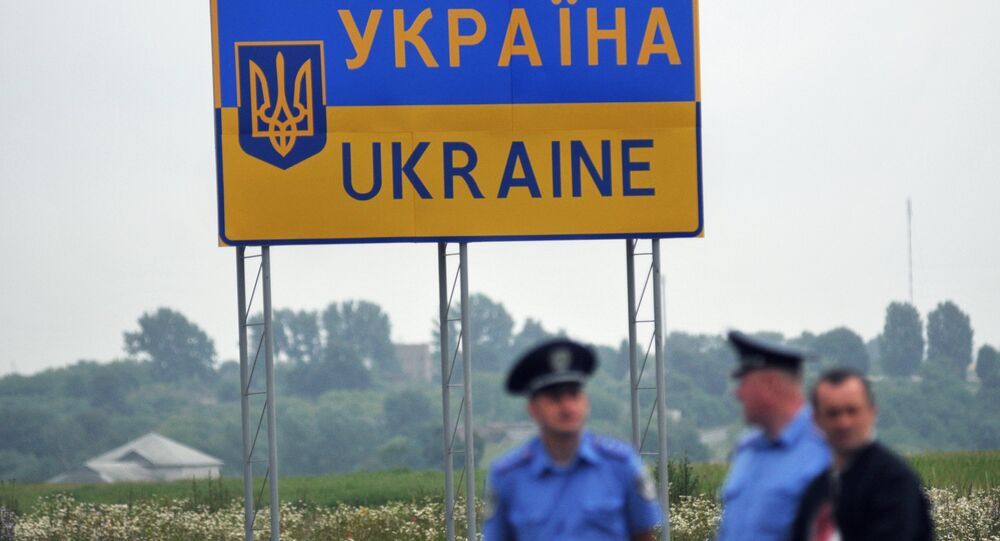 Business as Usual: Ukrainian Goods Flooding Into Donbass Despite Blockade

Looking to avoid payoffs to Ukrainian border guards at border checkpoints with the self-proclaimed Donbass republics, Ukrainian businessmen and truck drivers have been heading east, to Russia, where the trucks are rerouted and sent back into Donetsk and Lugansk, joining the steady stream of Russian humanitarian and commercial deliveries.

A recent investigative report by Ukraine's Podrobnosti.ua found that despite Kiev's tough rhetoric about the blockade over the breakaway Donetsk and Lugansk People's Republics, locals in the areas around the border checkpoints say that the flow of Ukrainian goods to the contested territories is far from drying up. A resident near one western checkpoint told a Podrobnosti reporter that everyone in the area knows that Ukrainian producers are "sending their goods through the town of Kurakhovo to Donetsk," and paying off checkpoint guards to get through. As for alternative routes, "well, if you want to stretch the trip, feel free. There are loads of roads…As for Lugansk, smugglers send their goods through to the Donets River, and then by boat to the other side."

Ukrainian news hub from-ua.com confirmed the practical difficulties Kiev authorities face in controlling the Ukrainian-DPR border, pointing out that "for every 100 square kilometers in the region, there are 30.3 kilometers of roads. In order to fully control all the possible paths, it would be necessary to place the entirety of the Ukrainian army on round-the-clock patrols at checkpoints." The resource also noted that "the human factor" of bribe-taking border guards, who "as we all know, are not always the purest of angels," is not only making Kiev's blockade difficult to enforce, but also compelling local residents to lose any sympathy that they may have retained for Ukrainian authorities.

Podrobnosti confirmed the ineffectiveness of the blockade, noting that plenty of Ukrainian goods, from tomato paste to pasta, can be found at the largest warehouse distribution center in the city of Donetsk.

Running the Blockade, or Around It…

© Sputnik / Sergei Pivovarov
Russian Aid Convoys Supply No Weapons to Donbass – Ukrainian Border Service
While some Ukrainian truckers try to get through the blockade by greasing border guards' palms, others simply drive north to Russia, loop around and head into the DPR and LPR from the east, over the Russian border. Reporting from the border at Donetsk's Izvarino checkpoint, Podrobnosti found trucks lined up in a long queue, almost as it were peacetime, with their goods, ranging from fuel to refrigerated and frozen goods, written up with both Russian and Ukrainian documents. Heading to the next checkpoint, in the Matve'ev Kurgan district, Podrobnosti's journalist noted that "here there are even more trucks. Uspenka checkpoint: On this side is Russian territory, and over my shoulder is the Donetsk region. Here we see about 50 trucks, and these queues are constant. As it happens, a good half of these trucks are Ukrainians bypassing the blockade." As an interesting side note, the journalist notes that here he also found Polish trucks, filled with food, heading to the DPR via Russia.

Local Russian trucker Mikhail told Podrobnosti that the number of Ukrainian truckers has skyrocketed over the past two months, as Kiev's 'get tough' policy has resulted in border guards demanding higher bribes. "It's been pretty intense lately, compared with last month and the month before that. Trucks from Lviv, from Kharkiv, from Zaporizhia, and Dnipropetrovsk are coming through here to make an extra buck."

Podrobnosti explained the consequences of the blockade simply: "The tougher the measures, the higher the bribes, and the more clever and sophisticated are the methods people find to get around these measures." Earning millions in profits for some, the blockade has become a super-profitable business for everyone except the ordinary residents of Donbass.

© Sputnik / Taras Litvinenko
Kiev to Enforce Complete Blockade Over 'Cancerous Tumor' of Donbass - MP
While entrepreneurs are continuing in their search for new ways to supply Donbass with Ukrainian goods, the media nevertheless expresses their fears that the efforts are not enough to prevent Russian goods from taking over the market, outcompeting goods that have to be smuggled in. "Russian entrepreneurs have harnessed the new market quickly and thoroughly. Even in small rural shops, the assortment is impressive. There are Ukrainian goods, but not many." Podrobnosti notes that Kiev's policy has left people in Donetsk and Lugansk with the impression that the blockade opens new opportunities for the Russian economy, while Ukraine is simply squeezed out of the region.

Despite the economic and political losses Kiev has faced as a result of the blockade, authorities are talking only about tightening it further. In an appeal to parliament last week, President Poroshenko announced that economic ties with the breakaway republics would be restored only when Kiev restores its control over the border with Russia. Otherwise, according to Poroshenko, "Kiev will not subsidize and assist the murderous militants and help to keep them afloat." Earlier this month, Poroshenko Bloc MP Yuriy Lutsenko called the Donbass a "cancerous tumor," saying the blockade must be intensified.