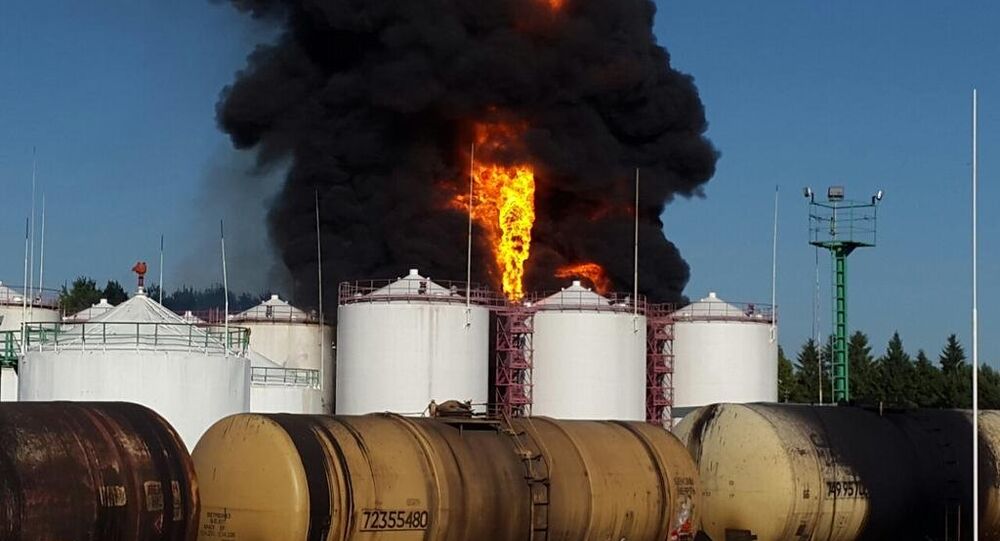 Several fuel tanks have caught on fire at an oil depot in the Kiev region, six people have been injured, Ukraine’s Emergencies Ministry reports.

MOSCOW (Sputnik) – The blaze, which erupted at a BRSM-Nafta oil depot on Monday evening, has affected eight fuel tanks, the ministry said in a Tuesday statement.

“Six firefighters have been sent to the hospital with burns. There is no contact with another six and a search is underway,” Avakov said on his Twitter account.

Kyiv suburb is on fire: BREAKING updates 4 from 9 oil tanks is burning right now in the village of Kryachky, Kyiv… http://t.co/Lgr27cYIuD

"As of 07:00 [04:00 GMT] on June 9, fire-fighting efforts continue, the fire has covered 8 tanks with a capacity of 900 cubic meters, as well as a number of smaller containers," the statement said.

"As a result of the fire five people have been injured; they have been taken to Kiev hospitals with wounds of varying severity," the ministry’s earlier statement said.

Over 300 people and more than 60 units of equipment are involved in extinguishing the blaze.

The oil depot is located in the village of Kryachky, about 40 kilometers (25 miles) southwest of Ukraine's capital, Kiev.

BRSM-Nafta Ltd. is a Kiev-based company that supplies gasoline and diesel in Ukraine.

FIRE IN KYIV SUBURBS: NEW DETAILSLast night In the village of Kriachko near the Kyiv suburb of Vasylkiv a fire had…