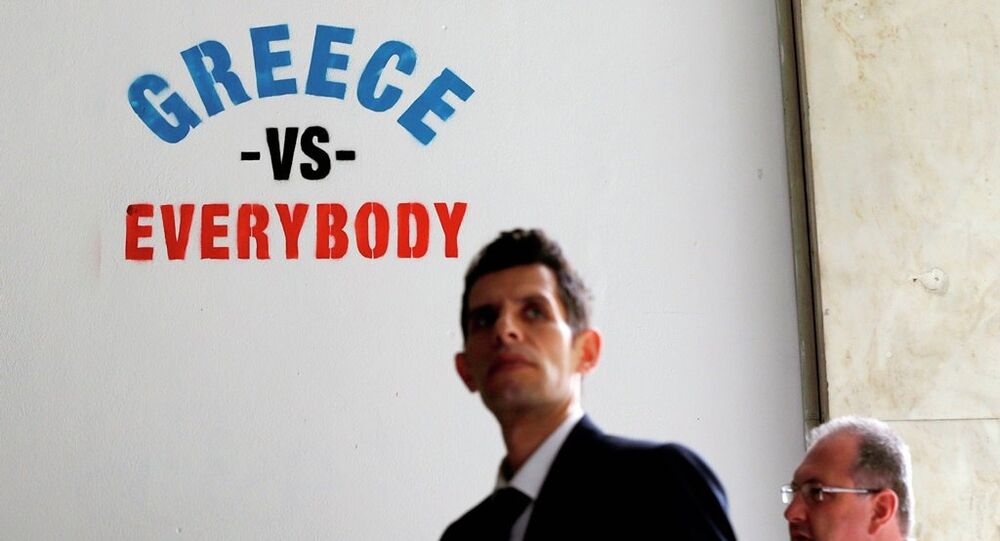 Greek officials have been met with more confusing messages following G7 talks on the country's debt crisis, with seemingly contradictory statements from leaders exposing the potential differences between Germany and France when trying to solve the deadlock.

While Greek finance minister Yanis Varoufakis met with his German counterpart Wolgang Schaeuble for more talks on how to potentially break the current deadlock in debt-for-reforms negotiations, G7 leaders — meeting in Bavaria, in Germany's south — also raised the issue during today's talks.

"The measures proposed by the troika have led to success elsewhere." #Merkel in full trolling mode on #Greece?

German Chancellor Angela Merkel was firm in her stance towards Greece, saying that Athens needed to stick to the rules as Greek officials try to unlock the final tranche of a joint EU, ECB, IMF bailout package, amid fears the country may run out of money as early as this month.

"Everyone around the table wants Greece to say in the euro….but we have rules," she said.

"All I can say now is that we want Greece to remain part of the Eurozone… [but] solidarity between European countries and with Greece means Greece will have to implement measures."

In a message to Athens, Merkel pointed to the Irish recovery and improvement in Cyprus' economy as examples of how austerity measures tabled by Greece's creditors can work.

The German chancellor's tough stance at putting pressure on Greece to make concessions towards a deal comes after Greek Prime Minister Alexis Tsipras labeled proposals tabled by creditors as "absurd."

However, Merkel's stance was somewhat countered by messages coming from the French leaders.

French President Francois Hollande, who is also attending the G7 summit, struck a much more conciliatory tone, saying that creditors could make alternative proposals to Greece in order to break the deadlock and prevent the country from leaving the Eurozone.

My speech to Parliament yesterday regarding the ongoing negotiations. http://t.co/SLNCeejW8B #Greece #vouli pic.twitter.com/W1VKxGm4AH

This followed more confusing comments from French Finance Minister Michel Sapin earlier this morning, who said that any potential Grexit from the Eurozone would not have a major impact on the rest of the bloc.

Speaking on RTL radio, Sapin said he expected a deal to be made soon — but fired off a warning shot to Athens should the impasse continue.

"It would be no drama for us to see Greece leaving the euro. It would not be serious from a financial or economic point of view. However, it would be a blow to the European project, because the European project is not to shrink but to enlarge, not to see members excluded but to welcome more."

The contradicting messages and demands from EU members and the creditors has been something that has been highlighted by Greece as a major reason that has delayed negotiations and prevented a deal from being made.

Critics have criticized the actions of the creditors during negotiations, saying the differing demands have made it almost impossible for Athens to try and strike a deal.

Martin Schulz: "For Greece, leaving the €uro means automatic EU exit". So, another good reason for Syriza to stick to its position.

However, the significance of seeing potentially compromising messages coming out of Germany and France has not been lost on analysts, who have suggested it could be a sign of cracks starting to show in the Paris-Bonn axis, which has been seen as a cornerstone of the EU, particularly amid growing Euroscepticism throughout both countries, as well as in Greece and the UK.