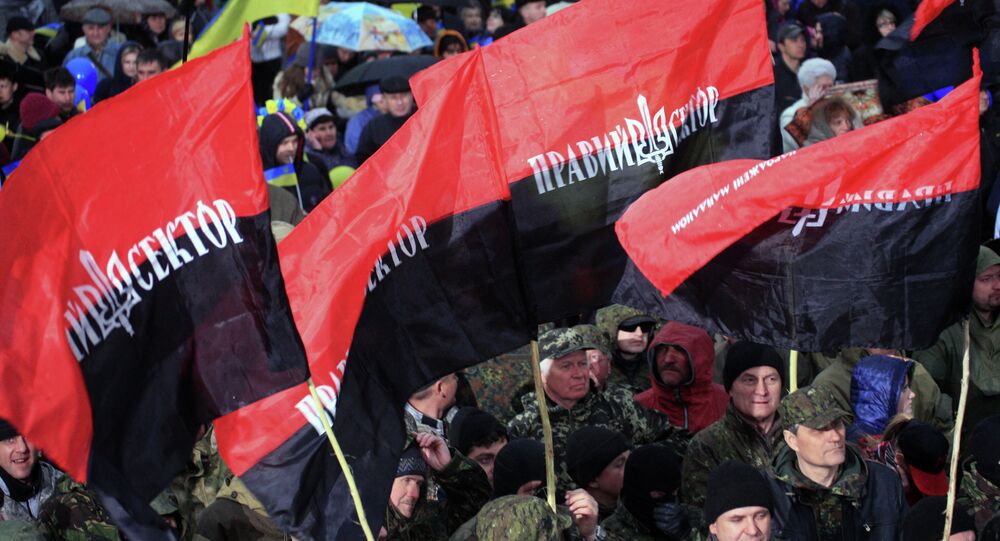 Analyzing the results of Saturday's botched gay pride parade in the Ukrainian capital, Ukrainian experts have suggested that Kiev's 'gay safari', as the march was referred to by members of the Right Sector, may have become the match sparking an outright war between President Petro Poroshenko and the radical nationalist group.

© REUTERS / Stringer
Gay March in Kiev Ends With Clashes, Wounds and Arrests (VIDEO)
In the background of an increasingly tense political and economic situation at home and the renewal of fighting in eastern Ukraine, tensions have been growing between the Ukrainian president and his erstwhile ultra-nationalist allies, the Right Sector.

Ahead of Saturday's event, Ukrainian authorities showed uncertainty about whether the march would even be possible, with former boxer and Kiev Mayor Vitali Klitschko calling for it to be cancelled. Nevertheless, Poroshenko stood firm, saying that 'KievPride' would go ahead, and that authorities would ensure its safety. About 1,200 police officers in riot gear were dispatched to try and keep the peace, met by a group of radicals armed with baseball bats, smoke grenades and tear gas. The clashes resulted in thirty arrests and 10 injuries, nine of them police officers.

© Sputnik / Pavel Palamarchuk
Right Sector vs. Gays: Leader Pledges to Defend Ukraine From LGBT Invasion
According to a source in the Ukrainian presidential administration, the march's go-ahead was not connected to any wider political strategy. "If the LGBT march had not taken place, the Right Sector would have found another reason or issue to attack us over. And they will continue to look for them," the source, speaking on condition of anonymity, told Vesti.

Citing experts, Vesti noted that the clashes resulting during the botched march were extremely favorable for the president: Poroshenko "appeared in the eyes of the West as a supporter of democratic freedoms (which is important against the background of growing criticism regarding the situation over freedom of speech) while the right radicals appear as a dark, anti-European force."

Political scientist Kost Bondarenko explained that this situation has untied Poroshenko's hand, providing him with a clear mandate from his benefactors in Washington to "deal with" the Right Sector in ways which may not be strictly legal. "In Western countries such radical organizations are dealt with in an unambiguous way, but as the promoters of democratic values, the US and the EU cannot publically support such methods. Here the situation with the LGBT march has played into Poroshenko's hands. Against such a background, the West will be willing to close its eyes to a great number of things."

Ukrainian media have been reporting ever-growing tensions between the Right Sector and Ukrainian authorities over the past few months. On Saturday, Right Sector paramilitaries conducted a loud march through the western Ukrainian city of Lviv, shouting phrases including "Poroshenko is a d***head" and "[Prime Minister Arseniy] Yatsenyuk is a d***head."

Vesti speculates that what Kiev must find worrying about the present situation is that the Right Sector, which plays such an important role on the front lines in the conflict in eastern Ukraine, "still remain outside the control of the Ministry of Defense." Last week, Right Sector battalion leader Andriy Stempitskiy said that the group was preparing a full mobilization, disregarding the Minsk ceasefire agreements. The group has previously been accused of numerous war crimes by human rights groups including Amnesty International.

© Sputnik / Alexandr Maksimenko
‘We Will Wage War': Ukraine's Right Sector Announces Mobilization
As for Poroshenko, his difficulties with the Right Sector are compounded by media reports that the large paramilitary group, with so-called territorial defense battalions strategically placed throughout the country, has maintained its political ties to deposed Dnepropetrovsk governor Ihor Kolomoisky, who is believed to be in the process of consolidating his forces for a political power play against the president.

Commenting on the outcome of Sunday's incident in the center of Kiev, Right Sector affiliate 'Trizub' ('Trident'), published a statement on their website stating that "as a result of decisive actions on the part of nationalists, the gay parade was limited to a distance of several meters. After that, under the protection of the police, the small group of perverts began to disperse. Some of them were nevertheless caught by nationalists during the famous safari." The 'safari' commentary appears to have been the group's way of commenting on their attacks on police and parade participants.