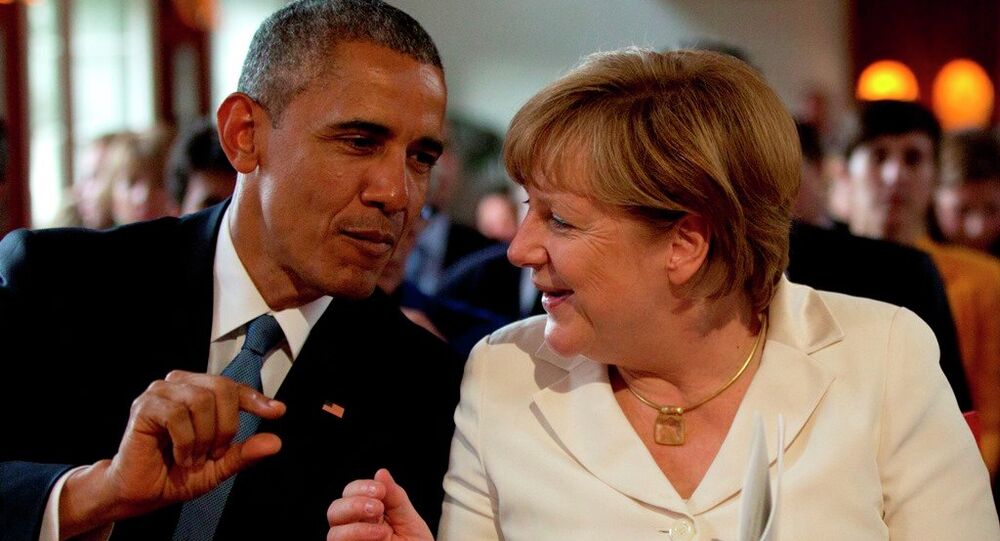 President Barack Obama is using side-meetings at the G7 talks in Germany to push his trade agenda to speed up the already slow negotiations over the controversial Transatlantic Trade and Investment Partnership (TTIP) in the face of increasing opposition on both sides of the Atlantic.

Obama has already met privately with British Prime Minister David Cameron and German Chancellor Angela Merkel at the G7 summit in Bavaria. He is frustrated that the US-European Union talks have slowed down and he may not even have the agreement in place during his presidency.

British officials told the AFP agency that Cameron was pushing G7 leaders to reach a deal by year's end. Merkel, in an interview with German television, said she wanted to work on the agreement "at top speed." In another interview, she said she and Obama discussed trade in their private session "because the American president also knows that there are certainly reservations in Germany."

Opponents to the TTIP in the US say the trade agreement could water down financial regulations. Senator Elizabeth Warren says that if the US and the EU harmonize their financial regulations, it could lead to a race to the bottom and undermine a 2010 US law that tightened restrictions on big banks.

Members of the European Parliament (MEPs) are calling for the controversial Transatlantic Trade and Investment Partnership (TTIP) to put an end to the "unequal treatment of European investors in the US." They are due to vote on TTIP in the plenary session starting on Monday.

The huge EU-US trade deal should deepen EU access to the US market, but must not undermine EU standards or the right to regulate in the public interest, say Trade Committee MEPs in draft recommendations on the TTIP and due to be confirmed by the entire plenary by vote on June 10. The European Parliament holds the power to approve or veto the final trade agreement.

There is deep disagreement over the use of the controversial Investor-State Dispute Settlement (ISDS) scheme, which allows companies in one country to sue governments in another country if an investment fails.

With an ISDS system in place, corporations would be able to challenge governments in a private trade tribunal. There are concerns that such a system would give companies excessive power over national authorities and allow them to sue governments every time legislation was introduced that might harm their profits.

TTIP is a threat to jobs, public services and democracy. Sign up and say NO to TTIP! http://t.co/8LVZTLzmMu #noTTIP

Opposition to the TTIP is particularly high in Germany, in part due to rising anti-American sentiment linked to revelations by ex-National Security Agency (NSA) contractor Edward Snowden (now living in Moscow) of US spying and fears of digital domination by firms like Google.

A recent YouGov poll showed that 43 percent of Germans believe the TTIP would be bad for the country, compared to 26 percent who see it as positive.

The level of resistance has taken Chancellor Angela Merkel's government and German industry by surprise, and they are now scrambling to reverse the tide and save a deal which proponents say could add $100 billion in annual economic output on both sides of the Atlantic.