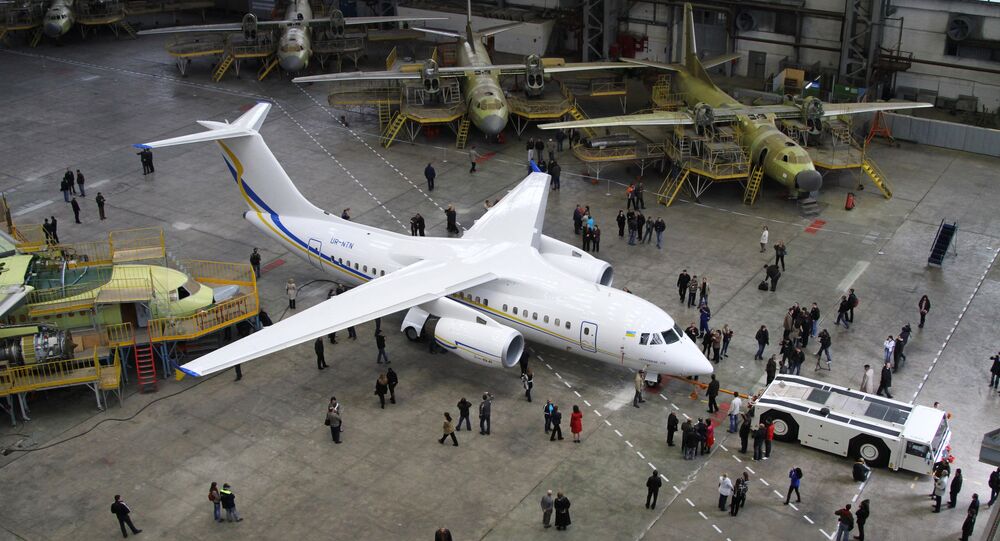 Why the Ukrainian-Polish Joint Aircraft Venture is Destined to Fail

Commenting on the recent announcement by Ukrainian aircraft manufacturer Antonov that it would be working with Polish companies to bring its aircraft in line with Western standards, Avia.ru portal editor Roman Gusarov explained why the project is destined to fail, noting that Warsaw has neither the technology nor the resources for such a project.

© Sputnik / Sergey Mamontov
Ukraine, Poland to Develop New Generation Patrol Plane
Last week, Ukraine's Antonov State Company announced that it was looking to collaborate with Polish industry in the aim of bringing its line of civilian aircraft up to Western standards, seeking to upgrade several models and to introduce a new patrol craft based on the An-148 regional passenger plane.

Commenting on the proposed projects, Avia.ru editor-in-chief Roman Gusarov told Russian news and analysis site Vzglyad that he does not believe that the project has any chance of success, for several reasons.

The expert argues that "today, there are five countries which objectively possess high-level aviation technology. Despite the fact that Russia is not among the leaders in the production of civilian aircraft, it is one of the technology leaders. Poland does not appear anywhere near this list, and cannot appear. In refusing to cooperate with Russia, Ukraine is effectively offering as an alternative cooperation with no one."

Furthermore, according to Gusarev, "the only thing that Poland could possibly help Ukraine with is financial resources," which in his view, it does not have.

© AP Photo / Ivan Sekretarev
Russia, China Sign Deal to Boost Sukhoi Jet Sales in Asian Markets
Noting that the definition of the word 'Westernization' is effectively based on a shift from Russian-made components to foreign or Ukrainian-produced parts, along with certification in accordance with EU technical norms, Vzgylad points out that this is much easier said than done.  In the first place, European and US manufacturers will not tolerate the appearance of a competitively weak new player in their markets. "Neither Europe's Airbus or America's Boeing will think for a moment about spawning competitors. For them, the best case scenario is to see the extension of Ukraine's high-tech industrial capabilities, which means that without Russia, Ukraine's aircraft manufacturing industry is doomed, unfortunately."

In Gusarov's view, without Russian support in raw materials and semi-finished components, or financial and technical ties and support, the path toward certification in Europe and the US will be unrealistically long and difficult. The switching of production of components to Ukrainian manufacturers will require huge investments into the modernization of productive forces, for which the Ukrainian government has no money.

"Replacing all the Russian-made components for the An-148 and other aircraft with foreign-made parts means, in effect, creating a new aircraft from scratch. Take, for example, the Ukrainian engine: it is made out of 80 percent Russian components and 100 percent out of Russian materials.  It's not possible to simply replace the components, and Ukraine is not capable of creating a new engine. This again would require huge investment and a major testing program," Gusarov explained.

The expert cited Russia's development of the Sukhoi Superjet 100, which he noted required massive financial support on the part of the Russian government, and a slew of completely new technologies, "neither of which exist in Ukraine. We had attracted foreign parts manufacturers, whose products were already certified. Therefore we were able to achieve certification in Europe, and still we face resistance in the marketplace."

Gusarev noted that "despite all its advances in the development of aircraft and engines, Ukraine still lacks several important components that would allow it to become a self-sufficient aircraft manufacturing power. It does not have the scientific basis or the technological reserve. All the scientific modeling and all the testing of Ukrainian aircraft was previously conducted at the Zhukovsky Central Aero-Hydrodynamic Institute [in Moscow]. Testing of the engines created in Ukraine is also carried out by a Russian institute. Ukraine does not have such institutes."

© AFP 2020 / SERGEY SUPINSKI
Workers at Kharkov Aviation Factory Protest Over 8 Months' Unpaid Wages
In the expert's view, "even if a miracle occurs, and suddenly, having spent a great deal of time and money to create the Ukrainian aircraft from Western components, Ukraine's production capabilities are outdated. This means that they will never be able to produce the aircraft in large enough quantities at a low cost. The aircraft will always lose to its competitors in terms of price, even taking into account the low wages in Ukraine."

Ultimately, Gusarev believes that Antonov's announcement on cooperation with Poland is an attempt to soften the blow resulting from the break in cooperation with Russia, serving "as a measure to ease social tensions" and bring workers in the sector false hopes that their factories will soon see new orders. In his view, the measure is a cruel game, "aimed at calming the large pool of workers who are employed in the sector, which has survived up to this day mainly due to Russian orders."

To Pay Off Gov't Debt, Every Ukrainian Must Pay $1,000 to Foreign Creditors