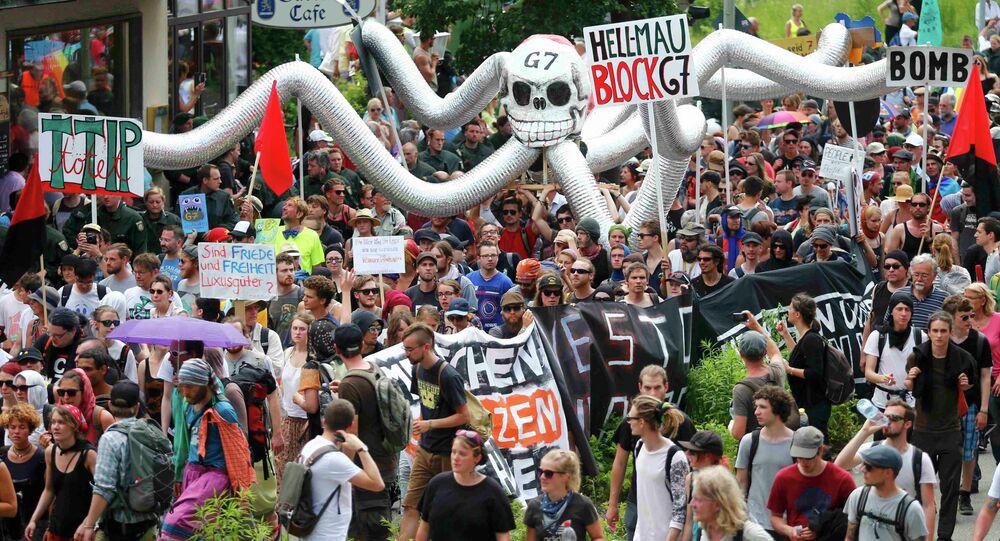 Over 3,500 Activists Gathered in Anti-G7 Rally in Germany

More than 3,500 activists gathered Saturday in the German Alpine resort town of Garmisch-Partenkirchen against the G7 summit which kicks off Sunday, a police source said Saturday.

GARMISCH-PARTENKIRCHEN (Sputnik) — "The demonstration and rally was attended by around 3,600 people. At the moment, some of them dispersed as a heavy downpour started the city. In the coming days, the demonstrators plan to hold a few more protests," a police spokesman told RIA Novosti.

According to police, the activists failed to reach the Bavarian Elmau Castle, venue of the Sunday's G7 leaders' meeting, as they stated on the eve of the rally.

"The demonstrators were assigned the route that they should strictly adhere to. This route ran at a considerable distance from Elmau," the police spokesman added.

On Sunday, according to the Stop G7 activist network, the demonstrators are going to block the highway on which the leaders of the G7 group are to arrive to the summit's venue.

© REUTERS
G7 Bears Responsibility for Wars, Environmental Problems - German Socialist
The German authorities have been boosting security in Bavaria ahead of the G7 summit. Last week, German Interior Ministry reintroduced border controls with Austria and the Czech Republic, and set up a high fence around the summit venue.

Germany took over the G7 presidency last June. The summit is scheduled to take place in southern Bavaria's Castle Elmau hotel, outside Munich, on June 7-8.