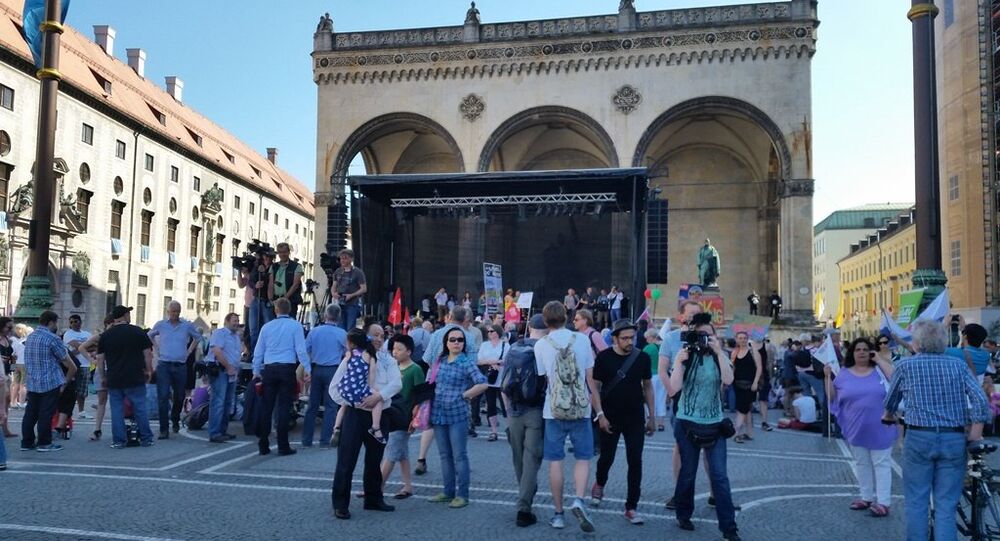 Around 400 German protesters from the grassroots Stop G7 initiative on Friday protested against NATO military interventions as they rallied outside the US-run Marshall Center in southern Bavaria, close to the G7 Summit venue.

Stop G7 spokesman Benjamin Russ accused the US-led NATO military bloc of a campaign of military interventions for the benefit of Western governments and corporations.

"These military interventions lead only to more deaths, more misery and more displacement. They cannot improve the lives of local populations, but that's not why these wars are waged. NATO wars serve to shore up profits of Western states and corporations," Russ was quoted as saying of the Stop G7 Facebook page.

Russ said that underlying principles of the Group of Seven (G7) policies were militarization and war operations abroad, repressions and disregard of protest rights at home.

© AFP 2020 / DPA / MICHAEL KAPPELER
US Soldiers Banned From G7 Zone for Fear of Attacks by Peaceful Activists
"These are two sides of the same coin in G7 policies," he said.

The main gate of a US Army base near the protest site at the Bavarian town of Garmisch-Partenkirchen, just a few miles away from the G7 venue, remained closed during the rally, the US Army Garrison Bavaria said on Twitter.

G7 leaders are due to meet Sunday for a two-day summit in Bavaria’s Castle Elmau hotel, at the foot of the Alps. German protesters camping outside Garmisch have prepared a week of action leading up to next Monday.