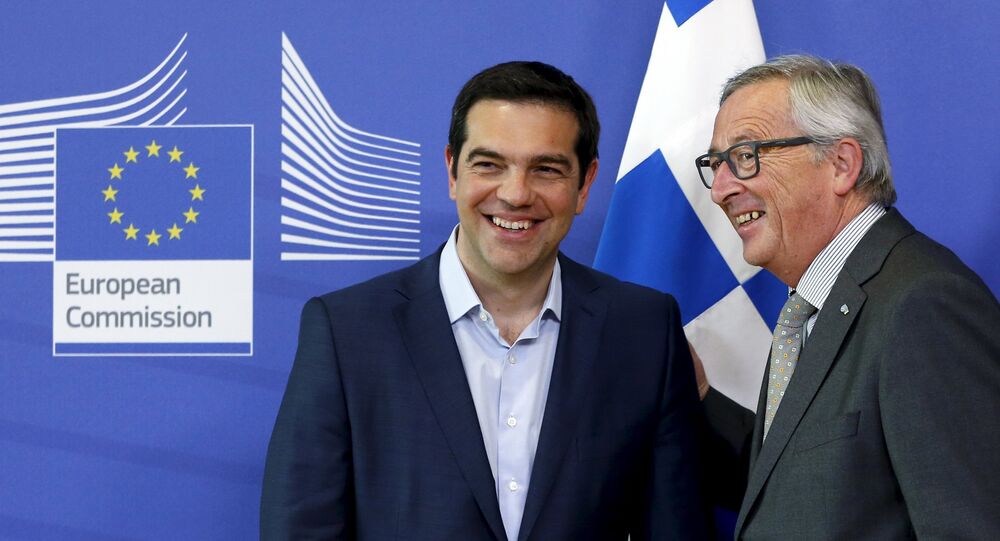 A Brussels meeting between Alexis Tsipras and Jean-Claude Juncker failed to lead to an agreement on a bailout package.

MOSCOW (Sputnik) –A Brussels meeting between Greek Prime Minister Alexis Tsipras and European Commission President Jean-Claude Juncker failed to lead to an agreement on a bailout package as Athens refused to compromise on some reforms requested by its creditors.

"It was a good, constructive meeting. Progress was made in understanding each other’s positions on the basis of various proposals. It was agreed that they will meet again. Intense work will continue," the European Commission said in a Wednesday statement.

Tsipras told reporters after the Brussels talks on Wednesday night that Greece still rejects some of the reform plans put forward by its creditors.

The meeting was also attended by Eurogroup President Jeroen Dijsselbloem.

© AFP 2020 / ARIS MESSINIS
Greek Leader Tsipras Urges EU to 'Accede to Realism' Ahead of Debt Talks
Greece was particularly hard-hit by the aftereffects of the 2008 economic crisis, quickly going into a multibillion debt by accepting large loans offered by the International Monetary Fund (IMF), the European Union and the European Central Bank (ECB).

Local media reported on Wednesday that Greece would not make the June repayment unless there was a guarantee of a new aid deal with the Brussels Group.

The country's ruling party hopes to secure additional financial aid without implementing unpopular economic and social reforms that its creditors are asking for before the current bailout plan expires on June 30.