European Parliament Vice President Alexander Graf Lambsdorff said that if Greece does not pay to its international creditors, Greece should leave the eurozone.

Greece is due to repay 300 million euro ($330 million) to the International Monetary Fund (IMF) on Friday. In total, Athens has to make a payment of 1.6 billion euros to the fund by June 19. In May, the Greek interior minister said that Athens does not have the money to make the June repayments to the IMF.

"If Greece does not fulfill it, then I say clearly that Greece should leave the eurozone," Lambsdorff told German television channel ZDF.

According to Lambsdorff, if Athens had left the eurozone a few years ago, it "could have been a disaster, as it would affect Spain, Portugal, Ireland." 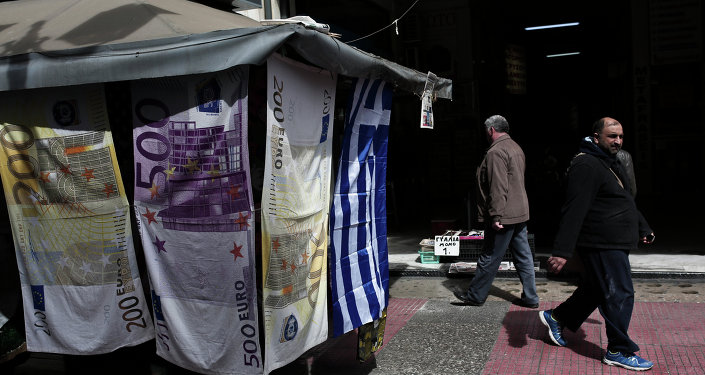 © AFP 2019 / ANGELOS TZORTZINIS
Europe at Crossroads as Greek PM Lashes Out at 'Absurd' EU Creditors
The situation is different because the three countries have carried out the reforms necessary to strengthen their economy, he said, adding that Greece, a country that has not met its obligations, is currently a negative impact on the eurozone.

"I am talking about the stabilization of the eurozone, the reliability of the euro," Lambsdorff said.

Greece was hit the hardest by the aftereffects of the 2009 economic crisis, with Athens’ overall debt estimated to be some 175 percent of the country’s GDP. The IMF, the European Union and the European Central Bank are Greece's biggest lenders.

Greece hopes to secure additional financial aid in exchange for unpopular economic reforms before the existing bailout plan, agreed upon with the European Commission in 2011, expires on June 30.

On May 23, Greek Prime Minister Alexis Tsipras called on creditors to make concessions as the country was ready to accept a viable agreement but not on "humiliating" terms.

Return to Drachma Would Be Catastrophic for Greece - Economists